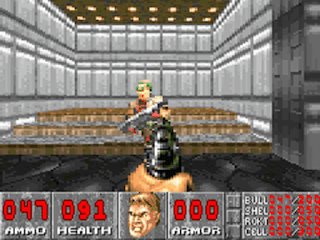 Genre: Action, FPS
Perspective: 1st-person
Gameplay: Shooter
Setting: Sci-fi / futuristic
Narrative: Horror
Published by: Activision Publishing
Developed by: id Software
Released: 2001
Platforms: Game Boy Advance (GBA), DOS, PlayStation (PSX, PS1), SEGA 32X, 3DO Interactive Multiplayer, Atari Jaguar, Super Nintendo (SNES), Nintendo 64 (N64)
The sensational shooter DOOM, which was sensational in its time, could not but appear on the screens of the GBA console. The port turned out to be a little different from what I would like from it, but nevertheless, thanks to the huge programmers for this. This game is suitable for both experienced fans and newcomers to the world of video games.
‹
›
Home
View web version