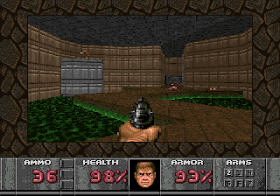 Genre: Action, FPS
Perspective: 1st-person
Gameplay: Shooter
Setting: Sci-Fi / Futuristic
Narrative: Horror
Published by: SEGA of America
Developed by: id Software
Released: 1994
Platforms: SEGA 32X, 3DO Interactive Multiplayer, PlayStation (PSX, PS1), Atari Jaguar, Super Nintendo (SNES), Nintendo 64 (N64), DOS, Game Boy Advance (GBA)
Is one of the very first games for the Sega 32X. With what can be and involves a fairly large number of flaws in the game. In the game only 17 levels, and in the version for the PC 27. If you play the game with cheats, you will not see the final clip. On one of the moons of Mars-Phobos, in the experiment with the teleporter, a catastrophic error was made. Because of which, through the portal opened, various beings have penetrated. Our goal is to clean them all and get to a certain place. That's what we are doing for 17 levels. You have to use a variety of weapons, including fists, to collect a first aid kit, body armor and other bonuses.
‹
›
Home
View web version