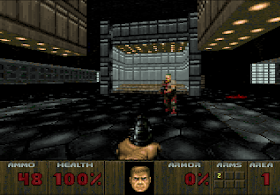 Genre: Action, FPS
Perspective: 1st-person
Gameplay: Shooter
Setting: Sci-Fi / Futuristic
Narrative: Horror
Published by: Atari Corporation
Developed by: id Software
Released: 1994
Platforms: Atari Jaguar, 3DO Interactive Multiplayer, Nintendo 64 (N64), Super Nintendo (SNES), PlayStation (PSX, PS1), SEGA 32X, DOS, Game Boy Advance (GBA)
Game Doom: Evil Unleashed is one of the first ports of the game Doom on the game console. This port is one of the most popular shooters. Unfortunately, like most ports this one was pretty cut. From the initial 27 levels in the PC version there are 22 and those greatly reduced and simplified. Also, some objects and graphic effects were deleted. But the most important thing is that the gameplay remained unchanged. It's still necessary to kill crowds of monsters and zombies, solve unpretentious riddles, collect weapons, etc.
The protagonist of the game is the unnamed soldier, although many call him: DoomGuy, Doom Trooper and Doom marine. But initially it is nameless, so that the player could associate himself with the main character. As a result of the conflict, the main hero of the Marine - one of the best, wills the fate of fate to Mars, where at this time experiments are conducted on teleportation. As a result, a portal was opened to hell (or to a certain planet) from which heaps of monsters came out. Everyone died or turned into a zombie. Only our hero remained alive, the main purpose of which is to survive and find the way out of this Hell.
In the game a large variety of different items, weapons, bonuses (artifacts), etc.
Of course, the game is difficult to compare with Alien vs. Predator for Atari Jaguar, but you need to understand that these are completely two different games.
The game can be played alone in Deathmatch mode, only for this it was necessary to have a JagLink device.
There are also modifications of Jaguar DOOM so-called Hack made with the help of various software and Hex editor. The most popular of them are two modifications from neo_rg: Doom_2_v98 and Doom AC2011 version. In the first version, the game is changed to the second part of Doom II changed everything to the flesh before the sprites. In the second, there are also significant changes and naturally new levels.
There is also a more global modification of the Doom game from Jag_Slave and it's called Freee Doom, it can already be called a completely new game. Completely changed sprites, animation, sounds and of course the levels.
You can also check out these hacks by writing them to the Flashcart Atari Jaguar or Skunkboard.
‹
›
Home
View web version