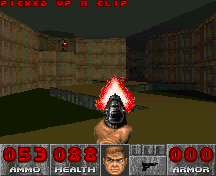 Genre: Action, FPS
Perspective: 1st-person
Gameplay: Shooter
Setting: Sci-Fi / Futuristic
Narrative: Horror
Published by: Williams Entertainment Inc.
Developed by: id Software
Released: 1994
Platforms: Super Nintendo (SNES), SEGA 32X, 3DO Interactive Multiplayer, PlayStation (PSX, PS1), Atari Jaguar, Nintendo 64 (N64), DOS, Game Boy Advance (GBA)
The surprise of launching the console is that the game starts immediately, without the main menu. They turned on the console, looked at the developers' logos, intro and ... Welcome to the first level. Having played with the management, we get important information. So, A - open the door, press the buttons and so on. In - run. X - change weapons and Y - shooting. L and R - step aside, Start - menu, Select - map. The cross is naturally responsible for moving. It's pretty simple, but one question gives me no peace: why didn't they make it possible to change management? And why exactly one button is suitable for the replacement of weapons? Well, let's say I am carping, let's go further. Management is perhaps one of the worst parts of the game: first, a step to the side and a turn cannot be made at the same time, and this is not just annoying, - in serious battles it rather hinders. Turning in the right direction is still an adventure. The reversal speed is about 1.5-2 times less than on a PC when using the keyboard to turn around.
The character responds to all commands with some kind of delay. According to subjective calculations, all actions are performed somewhere 0.5 seconds after pressing the button. Not much, but still enough to start annoying at later levels. And believe me, it WILL be annoying: there are so many levels in the game - at least, more than 32x. In addition, an unpleasant, very unpleasant bug is noticed - sometimes a character sticks to a wall and cannot get out of it. In order to break away from the wall, you need to step back, turn around and only then continue on the path. In narrow corridors ending in turns, this is not even annoying — this can be considered a very large problem.
Another shortcoming that should be noted quickly is that there are no saves in the game. In no way. Neither in the form of saving using the battery in the cartridge, nor using passwords. Turned off the console, turned it on - and forward, start all over again. Considering that the last episode can be completed only on the complexity of Ultra-Violence and above, it is easy to guess how passable such a game is. Given the above management problems.
What was possible in the game is music. The Super Nintendo sound system has shown itself in all its beauty, and in this version, perhaps the best non-CD music from all Doom ports in general. It is a pity that this is not applicable to sounds - monsters scream quite rarely, sounds often break off, sometimes for no reason, and sound very weak. And if the gun and shotgun still turned out well, just wait until the chainsaw gets into your hands. The miserable attempts that she makes are more annoying than the crowd of monsters in the corridor where you are buried in the wall.
Graphics ... Oh, my Emperor ... Half of the objects are simply not there, there are no textures on the floor and ceiling, the monsters' sprites are visible only from the front, the FPS sags, sometimes worse than in the port on the Sega Saturn. Thanks though, the architecture of the levels was copied from the PC version, and not from that for Jaguar. It is, however, to pay tribute - the interface looks pretty good, although it completely lacks a table with cartridges for each weapon, and instead of weapon numbers, an image of the selected gun is shown, as if they can be confused, given that the gun sprite is visible in front of the interface.
And I don’t know what resolution the image has - I’ll just say that it’s almost impossible to determine where the enemy is, and where objects like barrels are 5 meters away. At the same time, the enemies are notable for impressive shooting accuracy. Just great.
In conclusion, I want to say ... If you are a Doom fan, play better in the PC / X-Woh version. If you are a fan of SNES, play Super Mario World, Super Metroid, Adventures of Batman & Robin, Mega Man X, Super Castlevania IV, Star Fox and other good games. Doom should not have come to SNES - here it is nothing more than a technical demonstration. It is hard to play, it is inconvenient, opponents can hardly be discerned, and the sounds cause something in between pity and laughter.
‹
›
Home
View web version