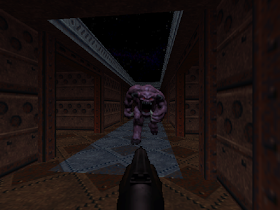 Key differences from computer games in the series include:
32 completely new game levels.
New, large-sized sprites of all monsters, objects and shells, which are filtered (English) when approaching the player to prevent pixelation.
A darker color scheme to enhance the impression of the game.
There is no machine gunner, archvaille, spider-leader and revantant due to insufficient capacity of cartridges for Nintendo 64.
All textures are new, moving clouds, limited ability to create sectors over other sectors, additional scripts.
The player's view is at the chest level, not at the eye level, making all objects look larger compared to the player.
The increased use of satanic symbols (pentagrams, inverted crosses, descriptions of sacrifices) than in the computer version of the game with the excellent use of the theme of horror.
More advanced atmospheric color lighting and effects such as parallax clouds, fog and light.
The altered weapon, which acts more destructively (believable recoil when firing, including a push back from the released missile).

The game contains all the weapons from the original game, and the sprites were redrawn. Chainsaw has received two blades instead of one, instead of a brass knuckler the hero is wearing blood-stained gloves, the plasma gun has an electric core that produces a spark sound when picked up. The double barrel recharges faster and can overheat. Added a new weapon, known as the "laser" or Unmaker, using the same ammunition as the plasmagan with BFG9000; Was scheduled to be included in the series of previous Doom, but never appeared. The appearance in Doom 64 is official only for the latter. With the help of three artifacts found during the game, the laser can become a more powerful weapon: the first artifact increases the fire speed, the second one adds one laser beam (see the Doom weapon list) and the third allows you to shoot three beams inducing independently of each other, that is weapons can hit three completely different goals.

Continuing the idea of ​​the original games in the series, the Marine, the only survivor among the horrors of hell, returned to Earth, clearing it of invading monsters that almost destroyed humanity. Demons continue to inhabit the abandoned corridors and complexes of Phobos and Deimos. As a last resort, the military decided to blow up satellites with a huge dose of radiation in the hope of killing all the remaining demons. Initially, the process was successful, but someone managed to survive. The demons are back - their corpses are resurrected and become stronger. The military strike forces were sent to capture the advancing armies of hell, but were destroyed. The protagonist must destroy the alien forces alone.

Doom 64 was developed by Midway Games at its studio in San Diego. The project was led by ID Software, the original creator of the Doom franchise.
The development of Doom 64 began in late 1994. Originally, the game was planned to be called The Absolution, but for the sake of recognition it was renamed Doom 64. The old name remained in the game as the name of the last level. Initially, Midway still wanted to include all the monsters from the original games into the game. Music and sound effects were created by Aubrey Hodges, who also created sounds and music for a number of games on the PlayStation port two years earlier.
‹
›
Home
View web version