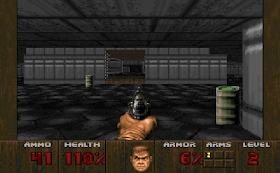 Genre: Action, FPS
Perspective: 1st-person
Gameplay: Shooter
Setting: Sci-Fi / Futuristic
Narrative: Horror
Published by: Art Data Interactive
Developed by: id Software
Released: 1996
Platforms: 3DO Interactive Multiplayer, SEGA 32X, PlayStation (PSX, PS1), Atari Jaguar, Super Nintendo (SNES), Nintendo 64 (N64), DOS, Game Boy Advance (GBA)
The version for 3DO causes a usual sense of interest - beginners will be much admired, but from the slowness of the action can not escape, and this spoils the game.
All in order; first of all forget the shameless advertising, although it is understandable why Art Data is persistently trying to promote the finished project with such a long delay and already skeptical project, the real situation is completely different from the advertised. The assertion that Pentium's systems are over speeding systems are very doubtful if one takes into account that this is achieved only by reducing the screen size by 50%. Likewise, talking about "permission from one image element to another" does not make sense, since the resolution of the game seems to be significantly lower than that of almost any DOOM clone for 3DO, since the release of Escape From Monster Manor.
On some screens, the reproduced image may resemble a picture of a poor-quality videotape, since the resolution of the TV and the game does not match. However, some graphic details, such as demon icons, thick walls and skeletons chained to them, are very impressive. The monsters are inferior to them by permission, this is especially evident in Killing Time or Deathkeep, but at a distance they look quite good.
The processor did not have enough power, even for a reduced screen size.

The 3DO version for technical reasons was cut down in the number of levels and weapons. We have 7 types of weapons, including heavy weapons.

Enemies who will confront you in 23 levels