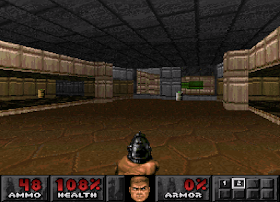 Genre: Action, FPS, Compilation
Perspective: 1st-person
Gameplay: Shooter
Setting: Sci-Fi / Futuristic
Narrative: Horror
Published by: Williams Entertainment Inc.
Developed by: Williams Entertainment Inc.
Released: 1995
Platforms: PlayStation (PSX, PS1),  SEGA 32X, 3DO Interactive Multiplayer, Atari Jaguar, Super Nintendo (SNES), Nintendo 64 (N64), DOS, Game Boy Advance (GBA)
Legendary Doom game for Sony PlayStation. The game, in fact, includes two games Doom (Ultimate Doom) and DOOM II. We have to play for the nameless fighter of the space special forces, although he has some other names in him: DoomGuy, Doom Trooper, Doom marine, as well as Flynn Taggart, John Grimm or simply Reaper. In the literal sense, we have to go through hell. As a result of the experiment being conducted on Mars, the gates were opened either to hell, or to the other world, or to another planet. In other matters it does not matter. All workers of the "laboratory" were killed or turned into zombies. We have to survive and return home.
The game has a good arsenal of weapons, a wide variety of enemies, and uneasy levels with labyrinths and secret places.
To port the Doom game to the PSX game console, a advanced game engine with Atari Jaguar was used. In many aspects, the game has become better, in particular, changes have touched on graphics and lighting. Compared to the PC version, some maps were changed, their geometry was changed. Basically, this was done to increase productivity (increase FPS). There are new secret cards and maps from the version of Atari Jaguar. In Doom for PSX, there are two enemies, Arch-vile and Icon of Sin. Their absence is compensated by new enemies.

To go to any level, just stop the game by pressing pause and enter the following code on the joystick 1: RIGHT, LEFT, R2, R1, Triangle, L1, O (Circle), X. Warp to Level will appear on the screen along with the number and the name of the current level. Now press RIGHT or LEFT on the D-pad to select the level number, and press any button to jump to that level.
It should be noted that this trick will not give you the opportunity to play five secret levels of this game. To access them, you must enter separate passwords for the levels:
Level 55: Fortress of Mystery - JCGDNFL888
Level 56: Military Base - 3P67ZNBQJG
Level 57: The Marches - JCGDNFL555
Level 58: The Mansion - 5QC5F! 0CHK
Level 59: Club Doom - S7V29T0FJK

Press START at any point in the game, then press DOWN, L2, Square, R1, RIGHT, L1, LEFT - while the game is paused. "ALL POWERFUL MODE ON" will appear on the screen, and your hero's eyes will begin to glow, showing that he is now invisible to the enemy!

Press START during the game, then press X, Triangle, L1, UP, DOWN, R2, LEFT, LEFT. The words "Lots of Goodies!" Should appear on the screen. Now you have full armor and all the maximum energy for all weapons and ammunition!

Click at any time of the game on START, then click Triangle, Triangle, L2, R2, L2, R2, R1, Square. The phrase "Mar All Lines On" appears on the screen, and you can now always see the full map. If you enter this password without pressing in the end to the Square, then on this map all enemies and all items that increase the power will be displayed.

Press START during the game, then press: L1, R2, L2, R1, RIGHT, Triangle, X, RIGHT, while the game is paused. When this trick works, you will be able to see through walls (until you come too close to it).
‹
›
Home
View web version