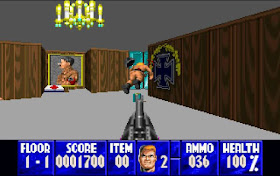 Genre: Action, FPS, Compilation
Perspective: 1st-person
Gameplay: Shooter
Published by: Interplay Productions
Developed by: id Software
Released: 1995
Platforms: 3DO Interactive Multiplayer, SEGA 32X, Atari Jaguar, Super Nintendo (SNES), SEGA Genesis / Mega Drive, DOS
The game is available, as it is not strange, just seven episodes. In addition to the standard already "Escape from Wolfenstein", added as usual "Operation: Eisenfaust" and "Die, Fuhrer, Die", as well as the prehistory in the form of three episodes, that is, "A Dark Secret", "Trail of the Madman" and " Confrontation ». In theory, everyone should consist of ten levels and that they should be sixty, but in this case there is still an episode of "Original Encounter" and what he is is I admit I did not penetrate, but it is known that the levels in it already 30 and if they are really unique (and not a random selection of existing ones), then in the game there are as many as 90 levels, and this is already some sort of bust, at least for such a sloth like me. Of course, if you take into account that to pass the episode, it's enough to pass only 9 out of ten levels (10 - like always secret), then it turns out well, let's say 83-84 (I do not even know how to be with this "Original Encounter"), then also not happy.
Although the 3DO version does not focus on the story, it's still clear. The main character is Captain WiLiam J. "B.J." Blazkowicz and his relations with the Nazis are peculiar. Then he hits them, then they hit him, and then he again them. The intricacies are cleaner than in the Brazilian TV series or any Indian cinema, and it's by the way not an example of DOOM where it's clear that by that time comrades from id Software have already become somewhat lazy in inventing the plot (than food was given to all the hysterical authors of fiction and inept directors).
Well, what else can you add? In the game there are several types of weapons (a knife, a pistol, a machine gun, a machine gun, a flamethrower), except for which the protagonist must collect cartridges, jewelry, food, first-aid kits, keys and other garbage along the way. After death, the weapon is not lost, except it can only be cartridges and of course one life. After the final death, when there are no more lives and a quick resurrection will be impossible, the game ends (although there is a possibility to load the saved game).

Guards in brown uniforms are scary only of their numbers. The SS men are protected by bulletproof vests. But dogs are more dangerous, especially dog-zombies. Dr. Schwabbs is thrown by syringes. The boss of the hostile German world - of course, Hitler.
From each killed enemy there is a clip with five cartridges. Without a backpack, you will not carry more than 99 rounds. With a backpack you can collect twice as much. Dog food increases health by 4%, and chicken legs - by 10%. The first aid kit will increase tonus by 25%. A circle with a portrait of your hero will give 100% energy and extra life. Fifty collected jewels also give an extra life.
All the most interesting is hidden in the secret compartments behind the sliding walls. Tap the walls, especially decorated with tapestries and portraits. You have to find such weapons: automatic, rotary machine gun, flamethrower and grenade launcher. Doors with yellow and green locks can only be opened with keys of the same color.

To see the map, press C + A, then release A while continuing to hold C. Use the D-pad to "scroll" the map.

Secret stages are similar to unclassified, but they are harder to find. At such stages you deliver hidden from prying eyes elevators. After the secret phase, you again fall into the ordinary.

Pause, move the cursor to New Game then press C then you can enter these codes.
KICKBUTT - Get All weapons.
NOKITTY - God Mode.
GREG - Invincibiliy, all weapons and keys.
LOGICWARE - Makes the hidden areas visible on the map.
BURGER - All Keys
FENLEY - Full Ammo
‹
›
Home
View web version