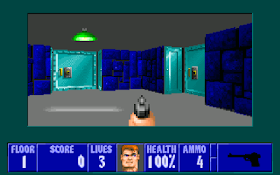 Genre: Action, FPS, Compilation
Perspective: 1st-person
Gameplay: Shooter
Setting: World War II
Published by: Chilly Willy, JLF65
Developed by: Chilly Willy, JLF65
Released: 2009
Platforms: SEGA 32X, 3DO Interactive Multiplayer, Atari Jaguar, Super Nintendo (SNES), SEGA Genesis / Mega Drive, DOS
Back in 2009, the development of a new game Wolfenstein 3D for Sega 32X on the source of the game, which are available in general, they were discovered by developers in 1995. Chilly Willy was also known as JLF65. Through his efforts, the game was brought to a victorious end. And now is in the stage in which we can observe it. The game almost does not differ from the original game Wolfenstein 3D for PC (DOS) 1992 from id Software and Apogee Software. It implemented the work of a six-button controller. Implemented Save and Load games (Save / Load). And even a quick save / load using the keyboard shortcuts controller. Added FM sound effects. And the most interesting thing is that the game is compatible with the mouse for Sega MegaDrive.
The plot of the game remained the same, as in the original. The player takes over the control of an American soldier, ally William Joseph «B.J.» Blazkowicz. The game begins right after the Nazis captured him and threw him into one of the most famous Nazi castles, the fortress of Wolfenstein. Its original task is to get out, although in the future fate will reduce it with various undead, mutants of trained Hitler soldiers, etc. and at the end of the journey with the Fuhrer himself.
Initially, the weapon from our character has a knife and a gun, which he took from the guard. In the game there are a lot of different secrets and, so-called, Easter eggs.
‹
›
Home
View web version