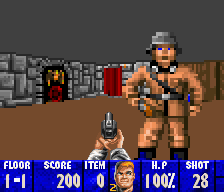 Genre: Action, FPS
Perspective: 1st-person
Gameplay: Shooter
Published by: Imagineer Co.
Developed by: id Software
Released: 1994
Platforms: Super Nintendo (SNES), Atari Jaguar, 3DO Interactive Multiplayer, SEGA Genesis / Mega Drive, SEGA 32X, DOS
A well-known shooter for PC appeared on Super Nintendo. Play is still very fun, and after reading the original version is also funny. In America at that time, there was severe censorship, so in this port all reminders of Nazism were removed. Swastikas were turned into signs "plus", blood and skeletons also disappeared. Guards and bosses began to speak English, the dogs turned into rats. On top of everything, Hitler's mustache was removed. Well, what kind of a Hitler without his mustache, so he was renamed to some Staatmeiste and William, the main character of the game, began to do a sweep in almost a new story for himself. The game was completely redesigned. New maps and music, some graphic changes, in general, this miracle is played very well. One of the best FPS representatives on 16 Bit, which did not please us with their frequent appearance on these systems. The display of the character's state, as noted by some, looks better than in the PC version, as well as the weapon. This version of the game included even two new types of weapons: a flamethrower and a rocket launcher. Very interesting aspect touched control. We drove him under the joystick Snes very dignified. Very fast and precise control was achieved. Dynamics is striking in its saturation. Wolfenstein 3D - the fastest and most dynamic FPS on 16 Bit. Do not underestimate this port. It's better to play and go fir You are interested in this genre on the old consoles, especially since there's a good humor after its castration. At least have fun - there is something.
‹
›
Home
View web version