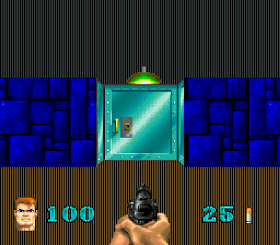 Genre: Action, FPS
Perspective: 1st-person
Gameplay: Shooter
Published by: Atari Corporation
Developed by: id Software
Released: 1994
Platforms: Atari Jaguar, 3DO Interactive Multiplayer, Super Nintendo (SNES), SEGA Genesis / Mega Drive, SEGA 32X, DOS
One of the most popular FPS Wolfenstein 3D is not bypassed and the game console Atari Jaguar. And the version for Atari Jaguar is, wash the best. Compared with the original for the PC game was significantly improved. A new graphic was drawn and many more positive changes. In the rest the plot of the game has not changed. We have to play captain William Joseph "BJ" Blazkowitz (Captain William J. "B.J." Blazkowicz). Initially, we have to escape from the Nazi prison. After that, do your main task to destroy Hitler. In this you will be prevented by SS men, animals and even demonic creatures. It is good to fight with them not with bare hands, in our arsenal may not be a small amount of weapons. There is not a small amount of blood in the game. At the end of each stage, we will wait for the boss. This is a game in which you should definitely play on this console.
‹
›
Home
View web version