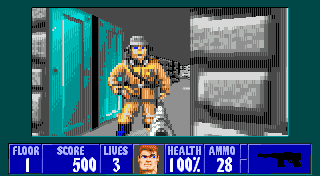 Genre: Action, FPS
Perspective: 1st-person
Gameplay: Shooter
Published by: Imagineer Co.
Developed by: Imagineer Co.
Released: 2014
Platforms: SEGA Genesis / Mega Drive, Atari Jaguar, Super Nintendo (SNES), 3DO Interactive Multiplayer, SEGA 32X, DOS
FPS games on the Sega is not so much the game of this genre on the Sega can be counted on the fingers of one hand. Comes to mind, Zero Tolerance of TechnoPop, port of Duke Nukem 3D on TecToy. Zero Tolerance - uniquely beautiful and very action about how a lone hero understands what happened in the space station. The game is also atmospheric. Duke Nukem 3D on Sega came as much cut off, in addition to the game, only the second episode. Even he had to be strong to compress and optimize opportunities under the MegaDrive. Therefore, the development of yet another FPS on Sega - an important event for all fans of the system.
The weapon has a fully - a knife, a pistol, machine gun. The latter is particularly pleasing. Enemies move actively, shoot at the hero. There are dogs, that and strive to attack you. The latest demo version to date and there is even the boss of the first episode of the original game. Realized and secrets - that is, some of the walls, portraits of Hitler and other decorations can be opened. Infiltrating in a secret doorway, we are waiting for a pleasant joy in the form of bullets, health, down the treasure. So often come to "stand out" the walls and try to open them, for they can be a secret room.
‹
›
Home
View web version