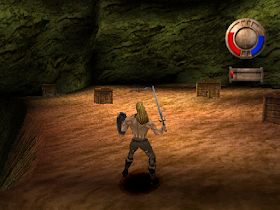 Genre: Role-Playing (RPG)
Perspective: Behind view
Gameplay: Action RPG
Paving: Real-time
Setting: Fantasy
Published by: 3DO Company
Developed by: 3DO Company
Released: 2000
Platform: PlayStation (PSX, PS1)
You play as Alleron who is charged with a crime he did not commit. Publicly convicted, he is marked as guilty with a special mask. This mask is not simple and is a kind of stigma of guilt, allowing the monsters of the protagonist to find wherever he is hiding. Most of the time, Alleron runs through the dungeons and tunnels where he is cast down, setting the heat to its inhabitants. Sometimes this action is tiring, because the dungeons are pretty monotonous and it's easy to get lost in them. Alleron has a good arsenal and magic spells at his disposal. From time to time you have to solve simple puzzles, which boil down to finding something in order to discover something.