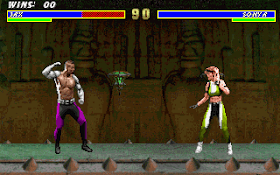 Genre: Action
Perspective: Side view
Visual: 2D scrolling
Gameplay: Arcade, Fighting
Narrative: Martial arts
Published by: Williams Entertainment
Developed by: Midway Manufacturing Company
Released: 1995
Platforms: DOS, PlayStation (PSX, PS1), Super Nintendo (SNES), SEGA Genesis / Mega Drive, Arcade Machine, SEGA Game Gear (GG)
Shao Kahn, the loser in the battle, Liu Kang (events MK2) and tired of the defeats of his servants in a tournament against the Terrans, begins to set in motion a plan, which began 10,000 years ago. On his orders, Shadow Priests, led by Shang Tsunom had to revive the former queen Kahn - Sindel, who died shortly after the capture of Caen Eden. As conceived by Kahn, Sindel should not rise in the Outer World, and on the earth, which would have the right to open a portal to Kanu earthly kingdom and take over the planet, surpassing the rules of Mortal Kombat.

When Sindel again in the realm of the Earth, Shao Kahn opened a portal to Earth and demanded his queen. His actions led to the fact that the Earth has become a part of the outside world and the souls of billions of people instantly became the property of Shao Kahn. Only a few people survived on the planet, thanks to Raydenu who defended their souls at the time of the invasion. The God of Thunder gives an indication of the survivors - to stop Kahn, but he has no right to intervene because of its status as the Defender of the Earth Kingdom. Rayden is not valid in the Outer World, and the Earth has become part of the outside world.
To destroy the chosen warriors, Shao Kahn sends troops to Earth fighters led by Motaro. Protecting Raydena applies only to the souls of soldiers selected, not on their bodies, which means that before you destroy Shao Kahn, earthlings have to try to survive in the battle with the servants of the Emperor.
Mortal Kombat 3 follows Mortal Kombat 2, and occurs at the same time as the Ultimate Mortal Kombat 3 and Mortal Kombat Trilogy, which were update MK3. Another new game series was Mortal Kombat 4.

Mortal Kombat 3 complicated battle system from the previous games in the series. One innovation was the key "Run" along with a strip of energy "Running". Ability to run the game was introduced because of the criticism of those fans who thought that the players who preferred to use defensive tactics, had more of an advantage to the players who chose to attack. A strip of energy "Running" was spent during the run and holding combos, then quickly recharged.
The second innovation is the "Pre-Programmable combo." Such combo - is pre-programmed sequence of keystrokes developers. After at least one blow will fall into the enemy, all the other blows to the combo are not lockable. Some combos end with an uppercut or other blow that throws the enemy into the air and allowing dzhaglinga [unknown term].
For players with different levels of training was presented with a screen «Choose your Destiny», which allows you to select a certain number of opponents.
First some levels are partly interactive. The enemy could throw an uppercut through the ceiling and continue the battle to another arena. This feature also allows you to change the sequence of levels in the game. Toss the enemy on the other arena can be a conventional uppercut uppercut and that was part of a combo. Kung Lao reception "Twisted vortex" also allowed to throw the opponent to the other arena. However, when was the last uppercut punch in the round, the opponent does not take off to the next stage.
Different types of finishing moves that have appeared in MK2 (Fatality, Friendship, Babality), returned to the third part of the series. The game also has a new finishing moves - Animality, which has long been rumors. During Animaliti winning opponent turned into an animal to kill his opponent. Another innovation - Mercy. The winning player can give your opponent a small percentage of their health and continue to fight with him. Mercy can only be done in the third round and it must be done for the Animality. As in MK2, on some levels, you can apply a background finishing moves.
Another new idea is implemented in MK3 - it Kombat Kodes. This is a six-digit codes, different combinations for which you want to type on the Versus-screen (or splash screen with a picture of the opponents before the fight) in a mode for two players. Codes allow you to change gameplay, fight hidden soldiers and bosses or reveal hidden messages of the developers. Apart from the usual combat codes in the game were presented ten-digit Ultimate Kombat Kodes, which had to be administered after the end of the game in single player mode. After entering the correct code, it is possible for a game of this part of the secret fighter - cyborg Smoke. Owners of arcades could dump the code in the diagnostics menu or DIP switches inside the arcade machine.
The overall style of the game is very different from the previous games in the series. In contrast to the MK1 and MK2, which were strong oriental motifs in MK3 dominated western and modern themes. Arena games are located in the modern urban locations, three new characters are cyborgs, and traditional design, some of the characters (Sub-Zero and Keno) was fully or heavily modified. The game looks much darker than the second part, and uses a darker and less saturated color palette. The characters look more realistic (as opposed to the MK2, in which the men looked a little "cartoon"). Many arenas in the game for the first time created using pre-rendered 3D-graphics. The changes were made and the soundtrack - Eastern motifs that prevailed in earlier parts of the game are replaced with modern music.

Jax (John Parrish) - Major U.S. Special Forces.
Kano (Richard Divitsio) - Member of the Clan "Black Dragon", which helps in the capture of Caen Earth.
Kun Lao (Anthony Marquez) - Shaolin monk, who, along with Liu Kan trained a new generation of fighters for the tournament.
Liu Kang (Eddie Wong) - champion of Mortal Kombat, which after the invasion to the earth was the main target groups for the fighters of the Emperor.
Sonya Blade (Kerri Hoskins) - U.S. Special Forces lieutenant.
Sub-Zero (John Turk) - ninja from the clan who fled the Lin Kuei, the younger brother of the original Sub-Zero.
Shang Tsung (John Turk) - the chief sorcerer of the Emperor Shao Kahn.

Under the boss and the boss

In certain arenas in MK3 is finishing the background.
The Subway - the enemy knocks train;
The Street;
The Bank;
The Rooftop;
The Balcony;
The Bridge;
Soul Chamber;
Bell Tower - the enemy breaks through the floors of several floors and falls on the thorns;
Kombat Temple;
The Graveyard;
The Pit III - opponent falls on a rotating blade;
Noob's Dorfen - only used in the battle against Noob Saibot;
Hidden Portal - used only in the fight against Smoke;
The Rooftop after Khan death - is similar to the simple "The Roof", but from the tower in the background in the sky rushes stream shower. Used when the skip battle with Shao Kahn in the version for the Sega using the code.

In MK3 opponent can throw an uppercut to the next level:

The Subway → The Street;
The Bank → The Rooftop;
Soul Chamber → The Balcony.

Reaction to the game

Despite the fact that the game was a hit, some fans of the MC did not like the fact that the games were excluded from the traditional and popular series characters such as Raiden, Johnny Cage, Reptile and Scorpion. In fact it was the first game of the series in which there was no multi-colored ninja (Sub-Zero does not count, because his appearance was completely changed compared to previous games in the series). This approach to the series was not popular with the fans of the game and therefore ninja warriors returned to apdeyte Ultimate Mortal Kombat 3. Also, many fans did not like the new arena for the battle that began the streets, subways, and other common areas to the cities, as opposed to the arenas of the first two parts of the game, which were strong fantasy and oriental motifs.
Some of the characters from the previous games in the series were played by new actors as the actors who played in the earlier parts of suing the Midway. Ho Sung Pak (Liu Kang), Philip Anne (Shang Tsung), Elizabeth Maleki (Sonia), Katalin Zamiar (China, Milina and Jade) and Dan Pesin (Johnny Cage, Scorpion, Sub-Zero, Reptile, Smoke, Noob Saibot ) did not participate in the creation of MK3. Instead, the new cast of characters played by Liu Kan (Eddie Wong), Sonya Blade (Kerri Hoskins), Shan Cong and Sub-Zero (both were played by John Turk). In Ultimate Mortal Kombat 3, all male ninjas were played by John Turk, all female ninjas were played Becky Gable. Johnny Cage Trilogy played Chris Alexander.
Carlos Pesin, who played Raiden in the earlier parts of the game, did not participate in the work on MK3, because of participation in the creation of the game Tatoo Assassin, although it is still listed as a staff Midway. Raiden back in Mortal Kombat Trilogy, which were used by the character sprites from MK1 and MK2.

MK3 has been ported to all major consoles of the time: Sega Genesis / Mega Drive, SNES and PlayStation. The game was also ported to the Game Boy and some other portable gaming systems.
MK3 to fit on the cartridge for Game Boy, the game had to cut back severely. Only nine of the fifteen fighters (Kano, Sonya, Sub-Zero, Cyrax, Sector, Shiva, Sindel, Kabal and Smoke) and only got five levels in this version. This port also had a combo, Motaro, and no other finishing moves, except Fatality and Babality. Shao Kahn uses its techniques from MK2. Despite the fact that the game is rated M (Mature), this version of the MK3 did not include an amount of cruelty and violence, as other versions of the game, although fatalities have been saved with the burning of the opponent. Graphics MK3 on Game Boy, is very good, with smooth animation and great attention to detail, in contrast to previous MK ports on the console.
There was also a version of MK3 and for Game Gear, which was never released in the United States. The game was released only in Europe and Japan, and is a rarity. New, packed with a version of the game can be found on online auction sites for the price of $ 90. This version is almost the same as the version for the Game Boy, but with a few significant differences: there is blood and violence, the game is not black and white and color, as it has Noob Saibot as a hidden character. There was also a version for the Sega Master System, is almost identical to the version for the Game Gear, although this port was only released in Brazil by Tec Game, Sega distribyutoroi products in this country.
There are two versions of MK3 for the PC. The first was a version for MS-DOS, which is a unique port MK3 does not look like a different version of the game. This port is very close to that of the gameplay to the arcade version, and also has good animation, sound effects and graphics. This version also has a secret audio track in which the narrator reads the story MK3 backwards. The second version of the game for the PC version was for Windows, which in fact was a direct port of MK3 with Sony PlayStation.
MK3 for Windows and PlayStation version became the basis for Ulimate Mortal Kombat 3 on the Sega Saturn.
MK3 has also appeared in anthologies Midway Arcade Treasures 2 (GameCube, PlayStation 2, Xbox), Midway Arcade Treasures Deluxe Edition, ((PC), this version includes a film about the creation of the game), Midway Arcade Treasures: Extended Play (PSP).