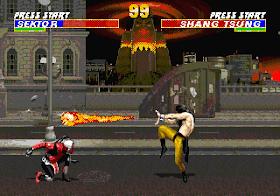 Genre: Action
Perspective: Side view
Gameplay: Arcade, Fighting, Martial Arts
Published by: Williams Entertainment Inc.
Developed by: Midway Games
Released: 1995
Platforms: SEGA Genesis / Mega Drive, PlayStation (PSX, PS1), Super Nintendo (SNES), DOS, Arcade Machine, SEGA Game Gear (GG)
Apparently, it is the third part that we owe those warm feelings that many of us experience when pronouncing the words of Mortal Kombat. Many thanks must be said to the developers for the fact that they did not stop in improving the gameplay of the game, thanks to which a completely new MC appeared.
If we consider our country, it was the first MK, which we really expected, and we waited consciously, specifically learning the details from the recently appeared game press, or trusting in the gossip of brothers in arms. The excitement was not comparable to anything. And what was happening in the States! Recently I read the old American gaming magazines of those years - everywhere discussions of how it will turn out, what will be the fighters, the zones, the killings. And in most cases, a multi-page "investigation" was based on a few words of one of the developers. For example, in an interview, Ed Boon says: "The changes will also affect the gameplay ..." The magazine, based on these words, considers a huge number of options for interpreting this expression. Since: "... maybe the magic will not be infinite." and ending with a very ridiculous one: "... maybe we are waiting for Beat 'em up! ..." In a word, the atmosphere around the new MK was heated to the limit. Shortly before the premiere, a film about the creation of the MK3 was held on the US cable channels, and the main channels were twirling an advertising video calling the people to go to the game rooms.
Speaking about the graphic superiority of any part of MK, it is necessary to understand that first of all original MK versions are compared on arcade machines, and it is virtually impossible to draw an objective conclusion about which of the parts of MK is better.
Most tend to consider a graphic standard of the MKII series with its large and effective fighters. I, too, generally agree with this, although, subjectively, the animation in the MK3 is smoother. Funny fact: all members of the MK team said in their interviews that graphically MK3 is a completely different level than MK II. The only exception was Mikicic, but he gave "confessions" regarding MK3 graphics after leaving Midway. Just one can say only one thing: the graphic component of the third part of Mortal Kombat was out of the competition at the moment of appearance of the game in the arcade halls, no other fighting game at that time could compete with MK3 in this aspect. Worthy of such fighting games was not, and compared with SF-like fights, I believe in the framework of this review is not correct. The truth is, millions of works have been written about this in the network.
Music. Another. No, neither better nor worse. Just different. The style of melodies has changed, as Mortal Kombat himself has changed, moving from something Shaolinsky to Cyberpunk. Gloomy future, the war of measurements, mechanical fighters instead of some already loved. The music suits all these innovations, but its quality is not reflected. Perhaps, only in the CD versions of MK3 can you hear improvements related to the transition to CD-DA. And so all the same hundred percent hit Dan "Tosti" in the bull's-eye. Sometimes it is not clear what gives the atmosphere more - music or scenery, this is rarely seen in games.
So why is MK3 not MKII? Why did we forget about the second part for many months, and sometimes even for years? Well, of course because of the gameplay! Oh, this is the unique gameplay of the third MK. Combes, speshly, the button "running". One new button in the MK3, and now between the second and third part of a huge chasm! I'm even ready to forgive you Sab-Zero without a mask for his ability to move his feet quickly. It's amazing how small the success of the game is.
The system of finishing in the MK3 consists of two Fatality per fighter, Friendship, Babality and Stage Fatality. In addition, two innovations were added. Mercy - the hero can take pity on the opponent and give him a chance to win with the restoration of his life for one blow. Animality - turning into an animal. Each hero has its own beast: here you have a polar bear at the Sab-Zero and an exotic tyrannosaurus from Stryker, and from the white shark of Cyrex, he's just trembling.
There were some secret fighters in this game. In addition to the opportunity to play for the bosses, the game allows you to fight for the cyborg Smoke. There is also Nub Seybot, in fact being only the accelerated dark version of Keno. To fight with it, you need to enter a special code on the versus-screen.
‹
›
Home
View web version