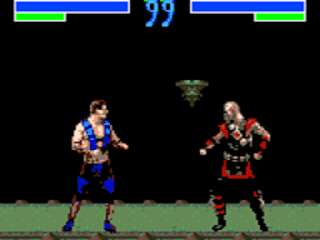 Genre: Action
Perspective: Side view
Visual: 2D scrolling
Gameplay: Arcade, Fighting
Narrative: Martial arts
Published by: Acclaim Entertainment
Developed by: Midway Manufacturing Company
Released: 1995
Platforms: SEGA Game Gear, SEGA Genesis / Mega Drive, PlayStation (PSX, PS1), Super Nintendo (SNES), DOS, Arcade Machine
Mortal Kombat 3 also exists on Game Gear. This is a terrible sight, I must say. There are only eight fighters to choose from, due to the small number of buttons on the Game Gear, the heroes have only two attacks, the backgrounds have disappeared as a species, the animation in the game is nowhere worse, and the sounds are absolutely different from those that were in the original on Genesis and SNES. Simply put, there are more than enough minuses in this game, but I did not even find any pluses (except for the name), even if you are a die-hard fan of the Mortal Kombat, it is better not to play IT.
‹
›
Home
View web version