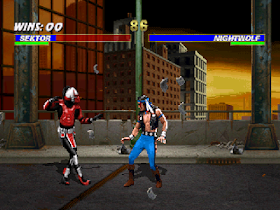 Genre: Action
Perspective: Side view
Gameplay: Arcade, Fighting, Martial Arts
Visual: 2D scrolling
Published by: Sony Computer Entertainment of America
Developed by: Midway Manufacturing Company
Released: 1995
Platforms: PlayStation (PSX, PS1), Super Nintendo (SNES), SEGA Genesis / Mega Drive, DOS, Arcade Machine, SEGA Game Gear
For centuries the Earth was able to resist the emperor of the Outward World Shao Kan. Twice he tried to take over the Earth, trying to destroy the best fighters of the Earth in the fights of the Mortal Kombat tournament. But thanks to their intelligence, strength, dexterity and devotion to their planet, Shao Kahn's plans failed. Angered by failures, the emperor decided to implement a new plan for the seizure of the Earth, the preparation of which he began almost 10,000 years ago. At that time Shao Kahn had an empress. Her name was Sindel. The premature death of Sindel was a terrible blow to Shao Kahn. But the servants of darkness, led by sorcerer Shang Tsung, made it so that the spirit of Sindel on one "beautiful" day was to be reborn, but not in the Outer World, but on Earth itself. This unholy event enabled Shao Kahn to go through the dimensions and reunite with the resurrected empress, finally capturing the Earth.
Having opened several spatial gates at the same time, cleaning Shao Kan rushed to Earth. They destroyed everything in their path, and Shao Kahn captivated the souls of conquered people. On Earth, panic, terror and fear reigned. Slowly the planet Earth began to turn into a part of the Outer World. But there were people on the Earth whose soul could not capture Shao Kang. These souls belonged to fighters elected to represent Earth at the new Mortal Kombat tournament. They were scattered all over the planet and Shao Kahn sent an army of ferocious and merciless fighters of the Outworld to find and destroy them. Some of the fighters-earthlings managed to survive after this attack, and some do not. There are not many chances left to preserve the human race. Will you be able to make good use of these chances? Ask yourself this question!
In total there are 14 fighters in the game, 7 of which are new in comparison with the previous parts. Each hero has 4 special movements:
‹
›
Home
View web version