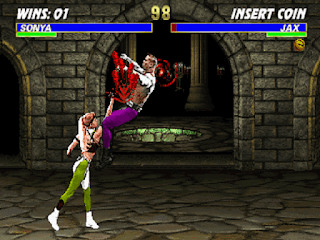 Genre: Action
Perspective: Side view
Visual: 2D scrolling
Gameplay: Arcade, Fighting
Narrative: Martial arts
Published by: Midway Manufacturing Company
Developed by: Midway Manufacturing Company
Released: 1995
Platforms: Arcade Machine, SEGA Genesis / Mega Drive, PlayStation (PSX, PS1), Super Nintendo (SNES), DOS, SEGA Game Gear
Mortal Kombat 3 retains all parts of the gameplay of Mortal Kombat II, the game adds a new fatality called "Animality", it transforms the winning character into an animal to deliver the last fatal blow to his opponent. Each character has five Fatalities in total: two “Fatalities”, one “Friendship”, one “Babality” and one “Animality”. The gameplay offers as main innovation, a key to run towards the opponent. Mortal Kombat 3 introduces a code system called "Kombat Kodes" for versus mode, six symbols are displayed at the bottom of the screen during loading, three symbols for each player. These codes are combination entries allowing players to fight with a handicap, the lack of display of the health bar, start the fight with 25% health points or even inflict more damage on their opponent. A code allows you to play shoot 'em up from Namco, Galaga.
Among the characters, Raiden and Johnny Cage are missing from the fighters roster, while Sonya Blade and Kano mark their return. The Scorpion and Reptile ninja are replaced by the Cyrax and Sektor cyborgs. These two characters have the same design, like Scorpion and Sub-Zero. Midway uses the principle of the swap palette technique for Cyrax and Sektor, which are respectively represented in orange and red9.
The arcade version was released in the United States on April 15, 1995. Midway Chicago is developing Mortal Kombat 3 on an arcade machine in parallel with the Sculptured Software studio, which is responsible for the PC, Super Nintendo and SEGA Genesis / Mega Drive versions. The Super Nintendo, Mega Drive, Game Gear and Game Boy versions were released, still in the United States, on October 13, 1995. Mortal Kombat 3 is also released on PlayStation, where Sony owns the game exclusively for 32-bit consoles for six months upon release.

Shao Kahn, defeated by Liu Kang during the Mortal Kombat tournament (which should have been Shao Kahn's minions tenth in a row, which would have allowed him to take over Earth), in the Outworld, sets up a new plan . He asks Shang Tsung, helped by the shadow priests, to resuscitate his former queen Sindel, unexpectedly dead in her young age. A former Empress of the Outworld, she possesses the ability to travel to Earth, a talent envied by Shao Kahn and which he intends to use.
So, once Sindel finds his body, Shao Kahn crosses the dimensions with his help. As a result of its action, the Earth Kingdom became part of the Outworld, and millions of human beings were immediately killed. However, a few may have been spared, as Raiden (protector of the Earth Kingdom) was able to protect their souls. He tells his fighters that Shao Kahn should be stopped, however as the Outworld merges with the Earth Kingdom, Raiden loses his powers and therefore no longer has the ability to stop Shao Kahn's troops.
Shao Kahn unleashed extermination squads across the Earth Kingdom to annihilate all of the survivors. Further, Raiden's protection is effective only to the soul, and not to the body. So his warriors will not only have to fight these platoons, but also repel Kahn.
‹
›
Home
View web version