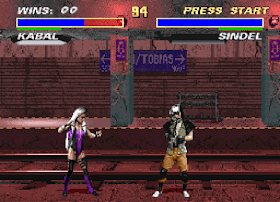 Genre: Action
Perspective: Side view
Gameplay: Arcade, Fighting, Martial Arts
Published by: Williams Entertainment Inc.
Developed by: Midway Games
Released: 1995
Platforms: Super Nintendo (SNES), PlayStation (PSX, PS1), SEGA Genesis / Mega Drive, DOS, Arcade Machine, SEGA Game Gear
One of the best fighting games in the history of this genre. Graphics and music is very decent level. In the fighting, I think you already know what to expect from Mortal Kombat. Of course, a sea of blood and cruelty. The murderous end of the fight and a bunch of other things already known. In general, the implementation on Snes is very worthy. In spirit, it is very close to the arcade original, in addition to the magnificent graphics and music, you are waiting for the pure speech of the characters, the sinister voice of the author. So fighting is recommended to everyone without exception, even if you've played it on other platforms. Graphics, speed of the game, music and voice - everything is done at the highest level.
‹
›
Home
View web version