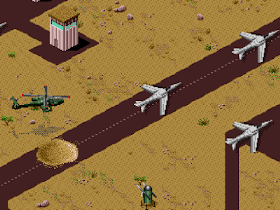 Genre: Action
Perspective: Bird's-eye view
Visual: Isometric
Gameplay: Shooter
Vehicular: Helicopter
Setting: Contemporary, Middle East
Narrative: War
Published by: Electronic Arts
Developed by: Electronic Arts
Released: 1992
Platforms: SEGA Genesis / Mega Drive, Super Nintendo (SNES), SEGA Game Gear, SEGA Master System, DOS
I'm not afraid of this word - the Great Game Series. Why did it become so popular? Perhaps, now we can not find a gamer who at least remotely did not hear, even about one representative of "Strike". This is what we will now find out.
I want to make a small reservation right away, so that the reader will have no more questions. And I want to clarify the situation with the genre of the game. The game can not be attributed to any particular genre. Most likely, she has some kind of own, unique classification. For someone it's a shooter, for someone "nedosimulyator", some (including your humble servant), relates it to the genre of the Strategy.
So, it's calmer, why do I hear screams about Star Craft? Strategies for games like the mentioned, the wedge did not converge. In the Strike series, the strategy is important, no less than in Dune, or, say, in the KKND.
Let's start with the story. The game takes place in the middle east. The terrorist leader - General Kilbaba, captures the Arab Emirates. Actively helping him in this comrade Madmen - merciless and greedy drug lord. It would be more correct to say that it does not help, but actively uses its army to seize power in the region. The whole world is shocked by this event. The terrorists have at their disposal chemical and atomic weapons, which threatens the entire world.

Americans decide to intervene in the conflict (where without them?). Where there is oil, they are always the first. In the zone of the conflict, a "Beat" command is sent with an Apache helicopter and a few highly skilled pilots. Actually, it is up to us to become one of these pilots, and to destroy the troops of terrorists, thus freeing the Arab Emirates, and removing the threat of destruction from the rest of the world.

An important aspect of the game is the gameplay. The game is divided into four voluminous missions, which in turn consist of several missions. Passage of each of them is quite a painstaking job. After all, your helicopter constantly runs out of fuel, cartridges that are spent on the destruction of enemies, and the armor that these very enemies spend. Therefore, we must always monitor the amount of fuel on board, armor, and cartridges. By the way, you are armed with a machine gun and two types of missiles: Hellfire - which is more powerful, and Hydras - less destructive, but there are more of them.
Replenish fuel reserves by collecting canisters with kerosene, weapons - boxes with them. But the armor can be replenished in two ways: either collect the ubiquitous boxes with it, or collect different people, then planting them on the landing areas. For each saved you will be added armor.
In addition, the fulfillment of each task turns into strategic planning - where any enemy combat units are, how to fly them better, etc. Especially it will not be superfluous, starting somewhere from the second mission.
At your disposal there is a map showing not only the location of the "resources" for your turntables and mission objects, but also some opponents. Use the card more often - a very useful and necessary thing.
Before starting the game, you are offered a choice of several co-pilots. They are responsible for the accuracy of targeting weapons on the target, as well as for lifting goods / people on board. Available only four to five choices can be selected after in one of the missions you release him from captivity. This aspect of the game should be approached very carefully, and carefully choose your partner - sometimes your life depends on his competent actions.
Graphic design in the game personally I really like, especially if you take into account the release date of the project - 1992. We will be looking at everything going on isometrics, and, in my opinion, this is the best option for this kind of games.
Music in the game a little, but the one that is, I was very impressed. The tracks convey the atmosphere of the game very well. During the performance of missions, there is no musical accompaniment, but this is only for the best - nothing is distracting. Sounds are also performed at a high level.
Management in Desert Strike is intuitive, buttons A, B and C are responsible for Hellfire, Hydras, and for the machine gun. Arrows we direct our helicopter, plow the expanses of the Arab Emirates.
The gameplay of the game is quite powerful, as is its replayability. The process of passing is very exciting, especially if you delve into the plot of the game, looking through intro, and reading briefings.

As soon as the first signal comes that the fuel is running out - throw all the cases and refuel.
Missions should be carried out strictly in the designated order, otherwise you risk losing all
Life in one fell swoop. As soon as you see the inscription "Danger zone" - immediately leave this dangerous place.