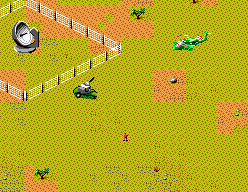 Genre: Action
Perspective: Bird's-eye view
Visual: Isometric
Gameplay: Shooter
Vehicular: Helicopter
Setting: Contemporary, Middle East
Narrative: War
Published by: Domark Software
Developed by: Electronic Arts
Released: 1992
Platforms: SEGA Master System (MS), SEGA Game Gear (GG), Super Nintendo (SNES), SEGA Genesis / Mega Drive
You are a pilot of the super-helicopter AH-64 Apache. There should be as many missions as written 27! And this is already a lot ... Destroy the infantry of the enemy, tanks, nuclear reactors, save the lives of prisoners - that's what you have to do in this good game ... For Sega Master System this is the only game in the series, and in general, there were two more games - Jungle Strike and Urban Strike can be found on Sega Genesis / MegaDrive.
‹
›
Home
View web version