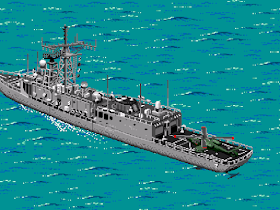 Genre: Action
Perspective: Bird's-eye view
Visual: Isometric
Gameplay: Shooter
Vehicular: Helicopter
Setting: Contemporary, Middle East
Narrative: War
Published by: Electronic Arts
Developed by: Electronic Arts
Released: 1992
Platforms: Super Nintendo (SNES), SEGA Genesis / Mega Drive, SEGA Master System, SEGA Game Gear, DOS
The plot of the game takes place in an Arab country, where the government seizes the mad general Kilbaba Medmen and his son - the leader of the Arab terrorists.
Kilbaba threatens the world of the Third World War, and is preparing a nuclear attack on Western countries. Meanwhile, the US government, concerned about the coup in one of the Arab countries, is preparing an operation to overthrow a dictator Kilbaba and destruction of nuclear facilities in the United Arab Emirates. It was decided to conduct a special operation with sending attack helicopters AH-64 Apache crew to destroy strategic targets of the dictator and his elimination.
In the last mission, after the elimination of nuclear plant pilots sent to the presidential palace to capture the dictator. To ease the air defense at the palace, the pilots destroying power. When the assault bin madman Kilbaba captures second helicopter pilot hostage and together with his assistant in the APC are sent to the airport to board a strategic bomber with nuclear bombs on board. The pilot of the helicopter catches up with terrorists and release the second pilot. Bomber began to disperse, but the brave pilots of the plane, along with destroying Kilbaba. Mission accomplished, the pilots returned to the frigate!

The game is a simulation of a combat helicopter with a third party, made with the use of isometric and consisting of five levels.
Gameplay is to move the helicopter player on a limited level. During the move is necessary to carry out the mission, the purpose of which - the destruction of certain buildings, enemies or naobrot, protection of buildings and allies.
The game has the resources necessary to perform the tasks:
Weapons. Visually, a green box. Set weapons, including a machine-gun bullets, light shells and rocket-propelled missiles. Each type of weapons varies according to the degree of damage done. On average, one rocket power equal to four projectiles, in turn, one shell is equal to four rounds of combat power. You can not take any particular arms, ammunition issued a complete set. If the player is already a certain quantity of ammunition on board, they add up to a maximum limit. Ammunition in excess of the maximum limit are lost.
Fuel. Visually represents three silver barrel. It allows you to refill the fuel to the maximum limit. Fuel over maximum limit disappears.
Armor. It looks like an oblong rectangular silver box. It allows you to restore your maximum armor.
Repair Kit. In the form of an oval box. It allows you to increase the speed of the rate, the speed of the lifting mechanism.
Location of the resources can be found by opening the map and view by selecting the appropriate option. Some resources are hidden in buildings and can be displayed as a map and missing. In advancing the amount of resources on the map will be reduced, complicating the execution of tasks.
The enemies in the game - enemy soldiers, guns, etc.. The soldiers are armed with several weapons - from the machine to the grenade launcher. Sometimes the soldiers may be on the lookout towers in the machine-gun nests and buildings, transport and use. The guns and other equipment are attacking machine gun bursts and missiles.
In certain places at the levels found by American soldiers and civilians. For the delivery of each ally to the base increases the current status of your armor. At the same time possible to take on board no more than six people.
Armor - the main indicator of life, but not the only one. In addition to hit enemies armor can spend if the helicopter under the player crashes into buildings or elements of the surrounding landscape. Life also spend if the helicopter end fuel. In this case, the animation will be shown with the fall and the explosion of the helicopter. After that, if a player has left the life of the helicopter to recover in the same place with a small reserve of fuel.
In some missions, the failure of the next job in a call to the helicopter base and restart the mission.
‹
›
Home
View web version