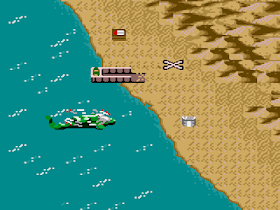 Genre: Action
Perspective: Bird's-eye view
Visual: Isometric
Gameplay: Shooter
Vehicular: Helicopter
Setting: Contemporary, Middle East
Narrative: War
Published by: Domark Software
Developed by: Electronic Arts
Released: 1994
Platforms: SEGA Game Gear, SEGA Master System, Super Nintendo (SNES), SEGA Genesis / Mega Drive, DOS
We are trusted with military equipment, and not with another pumped-up "Terminator". After our helicopter (we will control the helicopter) rises to the sky from a certain ship, control is transferred to the player, that is us. On the map, several strategically important points are marked, which must be destroyed, it means that we must fly and destroy them. Of course not everything is as simple as it seems at first glance, we will be hindered by the various guns installed on the ground, and the enemy helicopters also like to fit into a friendly company. In general, the game is original and interesting, although in my opinion it's disappointing graphics. As always, the storyline is typical: someone wicked and insidious tries to bring chaos to our world (or something like that), and you have to prevent it. And if more detail, then: a year after Gulf War, a certain Kilbaba joined the rebels in the Arab Emirate and threatens the US with the start of the Third World War. The world, with bated breath, follows the developments that follow, and the President sends you to the desert in order to destroy the general and his entire terrorist army before he makes a nuclear explosion. You have also been given the legendary super-helicopter AH-64A Apache.This is the first of the Strike series. After there were several extensions of this game: Jungle Strike, Urban Strike, Soviet Strike, Nuclear Strike.
‹
›
Home
View web version