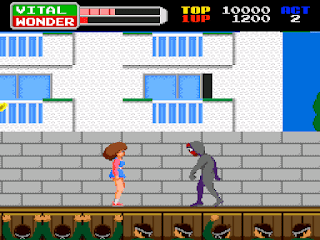 Genre: Action
Perspective: Side view
Visual: 2D scrolling
Gameplay: Arcade, Beat 'em up / brawler
Setting: Sci-fi / futuristic
Published by: Namco Limited
Developed by: Namco Limited
Released: 1989
Platform: TurboGrafx / PC Engine
You control the schoolgirl Momo. Why did you go out into the street, to the monsters, I do not know. But the fact is that you will have to fight them off. While you usually fight, the "wonder" bar fills up and once it fills up, you can transform into Super Momo!
Initially it was on slot machines.
Although the graphics are colorful, they are too simplistic. The sound is simple.
‹
›
Home
View web version