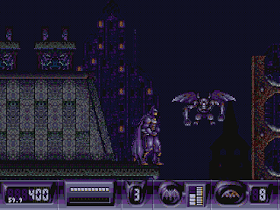 Genre: Action
Perspective: Side view
Visual: 2D scrolling
Gameplay: Platform
Published by: SEGA of America
Developed by: Malibu Interactive
Released: 1992
Platforms: SEGA Genesis / Mega Drive, Super Nintendo (SNES), Nintendo (NES), SEGA Master System, SEGA CD / Mega-CD
The game differs from the NES and SNES versions as it was not made by Konami. This is not a beat 'em up, but an action platformer. The only thing common between the games is the plot (according to the film) and, of course, the main character is the same. Batman fights the Penguin and his henchmen. As the game progresses, you can collect useful and painful weapons for enemies (harpoons, bombs). Without flying with the help of his miracle suit, Batman is also unlikely to do. Basically, the game is good. Single player game.
‹
›
Home
View web version