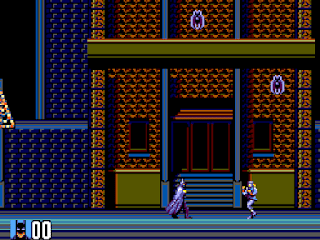 Genre: Action
Perspective: Side view
Visual: 2D scrolling
Gameplay: Platform
Published by: SEGA Enterprises Ltd.
Developed by: Aspect Co.
Released: 1992
Platforms: SEGA Master System (MS), Nintendo (NES), Super Nintendo (SNES), SEGA CD / Mega-CD, SEGA Genesis / Mega Drive
The main character is the well-known Batman. From weapons he has shurikens and a special rope with which he clings to buildings. Initially, you can choose one of two paths of passage. One is ordinary and the other is highly complicated. The atmosphere of the game is gloomy, which corresponds to the character of the hero. On your way there are a variety of enemies that are not difficult to deal with. The game cannot boast of high-quality graphics. The world around us looks very blurry.
‹
›
Home
View web version