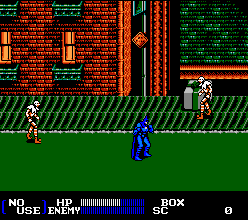 Genre: Action, Racing / Driving
Perspective: Side view
Visual: 2D scrolling
Gameplay: Beat 'em up
Published by: Konami
Developed by: Konami
Released: 1993
Platforms: Nintendo (NES), SEGA Master System, Super Nintendo (SNES), SEGA CD / Mega-CD
Once again, there was a threat over Gotham City. This happened in a calm winter time, right before Christmas holidays, when people spend most of their time on vanity in stores and choose gifts to relatives. Suddenly an explosion occurred in Gotham Plaza! A monstrous terrorist act did not leave the mayor of the city other options, as again to seek help from a superhero. So, Batman came back to eliminate the evil aggressor!
The game "Batman Returns" departs platform traditions of the past parts, now it is a classic beat'em up. In order to pass the game, you need to destroy all the enemies at the level, mainly with your bare hands, the familiar for the first part of the Betaranga now have a very limited number. Standard levels in the style of the Beat'em Up as they pass are replaced by a ride on the Batmobile and Batbord. The Batmobile is armed with a machine gun and Batdiskas, riding on the Batbourde is more like a bonus pass: there are no enemies in the level, but there are bonuses that need to be collected as much as possible.