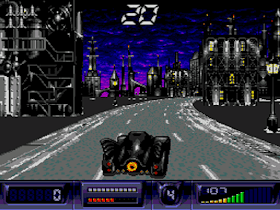 Genre: Action, Racing / driving
Perspective: Behind view, Side view
Visual: 2D scrolling
Gameplay: Arcade, Platform
Published by: SEGA of America
Developed by: Malibu Interactive
Released: 1992
Platforms: SEGA CD / Mega-CD, Super Nintendo (SNES), Nintendo (NES), SEGA Master System, SEGA Genesis / Mega Drive
The game begins immediately after The Penguin kills the Ice Princess and substitutes Batman. In the game, you have to drive a Batmobile in pseudo 3D. Just like Adventures of Batman & Robin for the Sega Mega-CD. Here your main task is to destroy all the enemies that you meet on your way in a certain time. You have an endless machine gun and rockets that you can replenish by knocking out bonuses. There is also a standard platformer as in the Batman Returns game for the Sega Genesis / Mega Drive.
‹
›
Home
View web version