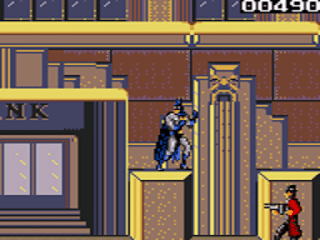 Genre: Action
Perspective: Side view
Visual: 2D scrolling
Gameplay: Platform
Setting: Fantasy
Published by: SEGA of America
Developed by: Novotrade International
Released: 1995
Platforms: SEGA Game Gear, SEGA Genesis / Mega Drive, Super Nintendo (SNES), SEGA CD / Mega-CD
Batman does what he usually did on the Nintendo, deals with criminals in his hometown of Gotham city: throws boomerangs like bananas at them, hits them with his fists, jumps on balconies, takes first-aid kits and so on, so on, so on ... In general, if If you liked the adventures of Batman on NES, then you will also like this game, otherwise the game is pretty average, although ... it has not bad graphics.
‹
›
Home
View web version