The Adventures of Batman & Robin (SNES) 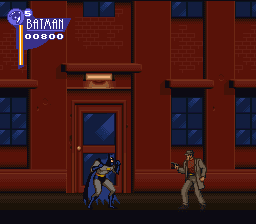 Genre: Action
Perspective: Side view, Top-down
Visual: 2D scrolling
Gameplay: Platform
Published by: Konami (America)
Developed by: Konami Co.
Released: 1994
Platforms: Super Nintendo (SNES), SEGA Genesis / Mega Drive, SEGA CD / Mega-CD, SEGA Game Gear
Adventures of Batman and Robin - several different video games from the Batman universe, released in 1994-1995 and combined only with the name. The plot is based on the animated series Batman: The Animated Series, which in the second season was renamed into the familiar "Adventures of Batman and Robin", that's how the name sounds in Russian. The actors in the game are two: Batman, one of the brightest comic characters from DC Comics and his partner Robin, and opponents from the game to the game can vary.The game was developed and released by the legendary video game maker Konami. One phrase is enough to say nothing more, the company has proven itself for decades. Actually, the developers did not rewrite the story, but also strictly follow the animated series too. There is no way to play Robin, he is an auxiliary character, however, I do not suffer from it at all. Different types of racing, platform jumping and active use of harpoon, quests and fermentation through the maze are interspersed with the standard genre of "piss-they-all." 8 stunning stages, a dramatically changing story, a magnificent fusion of thoughtful action, great graphics, animation, visual effects and brilliant music - than not an application for a big hit?
Even without a manual at hand to understand the misadventures of Batman is very simple, the game is full of dialogues that further reveal not only the plot, but also the personality of each individual character. Mini-bosses and all known villains: The Joker, Poison Ivy, The Penguin, Catwoman, Two-Face, The Scarecrow, The Riddler, Clayface and Man-Bat will appear before us in their eerie manifestation and will get what they deserve. Only Joker's assistant, Harley Quinn this time will survive. The game is not easy, so, write down all the passwords. However, for the regime "Hard" they are not provided, here or the pan or disappeared.Probably, the best game about the adventures of Batman'a on 16-bit. Despite the mention in the title Robin, he is not particularly important hero here. The game simply unimaginable atmospheric graphics and music. At each location hides its villain, one of the enemies Batman'a, which is stored in the sleeve of his trump card, conceals in his head atrocities and insidious plans. With them, of course, you will certainly get acquainted. But most importantly, do not forget to grab the desired item from the proposed equipment. Depending on the location and on which of the villains it hides, this item will be vital in order to pass through and solve all possible attacks provided by insidious, mentally abnormal personalities who try to destroy our hero not only by hired gangsters. If the villain's fanatical quirk is not enough for you, then you can not escape from the battlefield, and you will certainly have to go back. In general, the game perfectly recreates the spirit of Batman and the criminal city of Gotem. Before the beginning of the mission, Alfred mumbles something, and not even the dynamic gameplay contributes to this exciting atmosphere and spirit. For each enemy there are fists, from armed enemies we beat weapons with throwing "betaranga", use harpoon to reach high places and to overcome long chasms, and as it was said above, each of the villains presents his traps and surprises for our hero, ALL AS IN MULTSERIALA, Even on the "Batmobile" will give a ride. The game seems to represent all the enemies with which Batman fought in his cartoon adventures. This version is certainly recommended to familiarize all fans of this hero and his adventures. Depending on the complexity, and the final splash in the game changes to see the full, you need, of course, to play the game on Hard, but not everyone will be able to do it. But you should not be particularly upset, because it just comes down to the image of the additional heroes of the animated series about Batman.