The Adventures of Batman & Robin (SEGA) 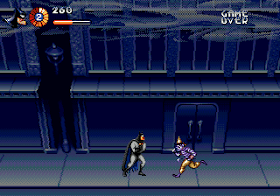 Genre: Action
Perspective: Side view, Top-down
Visual: 2D scrolling
Gameplay: Beat 'em up / Brawler, Platform, Shooter
Setting: Cyberpunk / Dark Sci-Fi
Narrative: Crime
Published by: SEGA of America
Developed by: Clockwork Tortoise Inc.
Released: 1995
Platforms: SEGA Genesis / Mega Drive, Super Nintendo (SNES), SEGA CD / Mega-CD, SEGA Game Gear
Again, the death threat threatens Gotham City. Mr. Freese had long been nurturing plans for total freezing of the city, and now, he began to implement them. Not without his icy touch from the prison for the mentally ill, the three most dangerous criminals of the city fled: Joker, Two-faced and Mad Hatter. And again only Batman and his subtle captain Robin are able to stop the wave of crime that has overwhelmed the metropolis. First of all, we need to deal with the Joker, who was so violently celebrating his birthday, that chaos and looting began in the city. And he himself does not hesitate to rob an exhibition of diamonds. The two-faced man climbed higher to piss more. And the Mad Hatter in his eccentric lair gathers an army of robotic soldiers.Finally! A game worthy of Batman's name! Zubodrobitelny action platformer with great graphics and animation, reminiscent of the cartoon. This is the only decent game about Batman on the Sega Genesis, which you simply have to have in your collection.Game for Mega Drive / Genesis was developed by the company Clockwork Tortoise and the publishing house itself was engaged in Sega itself. We are already used to the fact that games based on cartoons are obtained from a number of lousy, but now it's time to wean. Before us is a great fast-paced platform shooter in Contra style: run, shoot, hit, jump, run, dodge, everything in the best traditions.If it were not for the levels where you need to fly, but they are noticeably inferior in the drive, I would give the game the highest scores for all indicators. Another disadvantage is the extreme complexity of the game. Even the first level, where we deal with the cheesy girl Harley Quinn (I recall that we spared her on the Super Nintendo), is unreasonably complex and demands full return.4 levels, divided into several stages each, fast gameplay, rich application of visual effects, fantastic synthesized music, specially written by Jesper Kyd: all the best for us. To play, by the way, it is possible and together, simultaneously!
Skip levels: In pause mode, press B, A, Down, B, A, Down, Left, Up, C.
‹
›
Home
View web version