The Adventures of Batman & Robin (SEGA-CD) 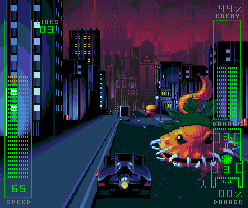 Genre: Action, Racing / Driving
Perspective: Behind view
Gameplay: Shooter
Vehicular: Automobile, Flight / Aviation
Published by: SEGA of America
Developed by: Clockwork Tortoise Inc.
Released: 1995
Platforms: SEGA CD / Mega-CD, Super Nintendo (SNES), SEGA Genesis / Mega Drive, SEGA Game Gear
Absolutely unusual realization of Batman. As in the case of SEGA Genesis, the developer is Clockwork Tortoise, and the publisher of Sega. I expected to see the action movie with cartoon inserts and CD quality music, but it turned out that it was racing, or, to be more precise, driving with avoidance of obstacles encountered.
Robin and Commissioner Gordon are missing. The Dark Knight suspects that this time the villains had something in common (otherwise Robin would have managed himself), and that without the acts of Poison Ivy, Mysterious and Joker was definitely not done. And there is. On his batmobile, the formidable Lord of the Bats will cut the levels in search of the villains, and if he does, they will not be happy: in the arsenal of Batman's personal car, there are enough weapons to deal a crushing blow!
The game is a race with obstacles. We do not need to offend anyone in the city, then, catching up with Ivy, dodging trees and other jammers. When playing catch-up with the villains it is necessary to bomb the enemy's car with an available arsenal. At the end, the gameplay will change to a 3D flyer - you already control the biplane, diving over the bridge of the dark Gotham City. Rupert Thorne must answer for everything.
Between the levels of the player waiting for animation inserts - as many as 16 minutes of video! Intrigued gamers in one voice began to claim that there is a so-called lost episode, where the clips for the game were cut. In fact, they were painted specifically for the game in the studio TMS Entertainment, has already applied its brush to some episodes of the animated series. Since the video has not been censored, it's more violent than it should have been. The same actors were voiced.
The game turned out to be dynamic, in some places difficult, but still interesting. The hardware capabilities of the Sega CD are used here for one hundred percent - definitely you need to try! Only six levels, by the way.
I've already listed all the pros, but there are also disadvantages. First of all - the cheated expectations of gamers - they did not expect the races, give them a fist. Then the technical imperfection of Sega CD: neither sound, nor even more so the picture does not drag on animated, and it takes time for buffering the animation inserts. Nevertheless, the general emotions of the game are extremely positive.
Level select: Pause the game and press B, A, Down, B, A, Down, Left, Up, C.
‹
›
Home
View web version