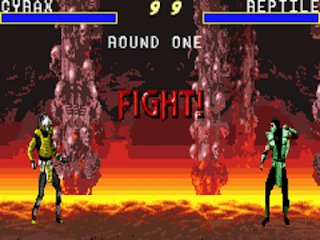 Genre: Action
Perspective: Side view
Visual: 2D scrolling
Gameplay: Fighting
Published by: Midway Home Entertainment
Developed by: Midway Manufacturing Company
Released: 2001
Platforms: Game Boy Advance (GBA), Arcade Machine, SEGA Genesis / Mega Drive, Super Nintendo (SNES), SEGA Saturn
The set of characters in the game is the same as in the UMK3 versions on the Sega Genesis and SNES. Due to the fact that the GBA has two buttons less than the UMK3 arcade machines, many combinations for special moves and finishing moves have been changed or have been combined.
The level of violence in the game has been lowered due to the younger age of gamers who usually play games on the GBA. However, the game was still rated M (Mature). All characters, except for Noob Saibot and the bosses, have one Fatality and one Friendship. Three hidden characters can be revealed by passing any of the towers with opponents, except for the Novice tower. Smoke is unlocked after passing the Warrior Tower, Motaro unlocking after passing the Master Tower and Shao Kahn unlocking after passing the Grand Master Tower.
‹
›
Home
View web version