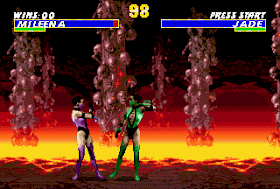 Genre: Action
Perspective: Side view
Visual: 2D scrolling
Gameplay: Arcade, Fighting, Martial Arts
Published by: Williams Entertainment Inc.
Developed by: Midway Games
Released: 1995
Platforms: SEGA Genesis / Mega Drive, Super Nintendo (SNES), SEGA Saturn, Arcade Machine, Game Boy Advance (GBA)
Continuation of the famous series. Unfortunately this game showed that Midway is interested in the "quantitative" expansion of the series, and not in "qualitative". The graphics remained at the same level as the voice-over. Yes, new characters appeared, but they represent one and the same Same fighter - a colorful ninja. Because of these identical ninjas sacrificed some decorations and all ANIMALITY. In general, a stripped-down version of MK3, you can play, but nothing new will be seen.
Mortal Kombat-The game that all gamers know. A bloody pug that turned 10 years old in the outgoing year. The game that has always been loved and will remain loved by real gamers.
‹
›
Home
View web version