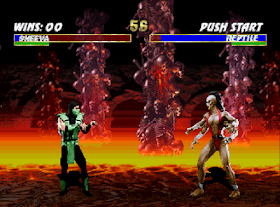 Genre: Action
Perspective: Side view
Visual: 2D scrolling
Gameplay: Fighting
Published by: Williams Entertainment
Developed by: Midway Manufacturing Company
Released: 1996
Platforms: SEGA Saturn, Super Nintendo (SNES), SEGA Genesis / Mega Drive, Arcade Machine, Game Boy Advance (GBA)
This version is based on the Mortal Kombat 3 version for Windows and PlayStation and has the same graphics and main menus. Also in the game there are elements from MK3 removed in the original version of the game. The Bank level is present in this version. Shang Tsung got the opportunity to turn into a cyborg Smoke, which was impossible in the original. Secret characters could be discovered using secret options, which made it unnecessary to enter three different codes to open each fighter. This method is much faster, especially since secret fighters do not remain open after turning off the console. Ultimate Combat Codes were shortened to six characters, instead of ten.
Also in the game there were some other differences from the original version: several new Combat Codes were added, but some Codes from the arcade UMK3 stopped working. Noob Saibot is again a shaded black Kano in this version. Since the game does not have a video demonstrating the gameplay, the Rine does not appear, however, the secret message (opened with the Combat Code) "The Rine can be found in the cemetery" is still in the game. Viewing the Highest Demonstration of Finishes may take 30 minutes, as Saturn will read information about each Finish from disk. This causes the game to stop at boot time. When the demonstration takes place at a level where there is animation, the fighters stop and the animation continues to work.
‹
›
Home
View web version