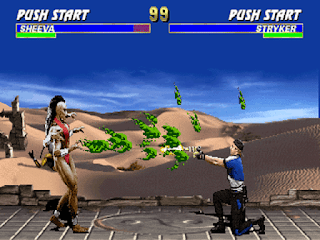 Genre: Action
Perspective: Side view
Visual: 2D scrolling
Gameplay: Fighting
Published by: Midway Manufacturing Company
Developed by: Midway Manufacturing Company
Released: 1995
Platforms: Arcade Machine, SEGA Genesis / Mega Drive, Super Nintendo (SNES), SEGA Saturn, Game Boy Advance (GBA)
It mainly includes new characters, new special moves and new arenas. The Sega Saturn version is developed by Eurocom, it is a conversion directly from the arcade. The first version of Mortal Kombat 3 was originally supposed to be released on Saturn, but Sony having acquired exclusivity on 32-bit consoles during a six-month period, publisher Williams Entertainment is taking advantage of the schedule to release the update. day coming from the arcade on the Sega console. Ultimate Mortal Kombat 3 is also ported to 16-bit, SEGA Genesis / Mega Drive and Super Nintendo consoles. New Level Software is in the process of developing the 3DO Interactive Multiplayer version, but due to development delays, the game's release has finally been canceled.
Ultimate Mortal Kombat 3 features new game modes, “4 Player 2 On 2 Kombat” mode, where each player selects two fighters who will fight one after the other. The second mode is a tournament mode where eight characters are selected in fights with elimination phases. Winning a tournament grants the player the opportunity to open Shao Kahn's treasures, they are displayed on the screen as symbols. Twelve symbols are presented, to gain access to the first four symbols, the player must win the tournament in the “Novice” difficulty level. For the six symbols, it is necessary to win the tournament with the “Warrior” difficulty, eight symbols in “Master” and all the symbols are accessible by finishing with the “Double Master” level. Some arenas have multiple planes as the player finishes off their opponent using an uppercut, such as rails on a subway or blades at the bottom of a bridge.
Absent in Mortal Kombat 3, Scorpion returns to the list of playable characters, Jade, a secret character from Mortal Kombat II, also appears in this Ultimate version as a playable character16. The game totals 22 fighters, some of which are unlocked using manipulation. In the character selection, three boxes are grayed out, they are represented by three hidden characters: Mileena first appeared in Mortal Kombat II, Ermac who is originally a line of code to report a bug in the first versions of arcade from the first game, and Classic Sub-Zero, the original Sub-Zero character from the first Mortal Kombat18. Two other secret characters are also present, the human version of Smoke and Noob Saibot, embodied by the shadow of Kano in the Saturn version.
‹
›
Home
View web version