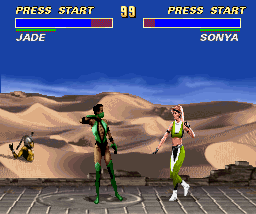 Genre: Action
Perspective: Side view
Visual: 2D scrolling
Gameplay: Fighting
Published by: Williams Entertainment Inc.
Developed by: Midway Games
Released: 1996
Platforms: Super Nintendo (SNES), SEGA Genesis / Mega Drive, SEGA Saturn, Arcade Machine, Game Boy Advance (GBA)
Ultimate Mortal Kombat 3 for the Super Nintendo is a lot like Mortal Kombat 3, but here are a few new modes of battle, were added some new characters and opened several paylines. For example, there is a greater confrontation between reptiles, faithful dog fighting Emperor and Kitana. Reptile have orders to return Kitana in any way possible, even killing her. Reptile is a very dangerous opponent, he can spit acid, roll, run on the walls and become invisible.Scorpion - the enemy of the main characters, the soldiers of the Earth, which called for their service of the Emperor. He was killed Sub-Zero, avenged him hit the unreal, but in this game he will be on the side of the forces of good, remembering his own oath. Also, the game has all the main characters of the third part of a series of games, including the main champion and popular with many Sonya Blade, Lieutenant US armed forces. Available all the Arena except for two locations.In the game there is a den of Scorpion, which can be a new way to finish off the enemy, knocking it into a banal lava. Endurance Mode has been improved, you can access several new characters as well as new locations if it successfully pass.
‹
›
Home
View web version