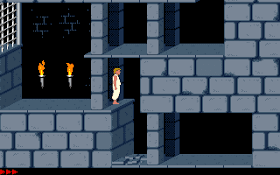 Genre: Action
Perspective: Side view
Visual: Fixed / flip-screen
Gameplay: Platform, Puzzle elements
Setting: Middle East
Published by: Broderbund Software
Developed by: Jordan Mechner
Released: 1990
Platforms: DOS, Nintendo (NES), SEGA Master System (MS), SEGA CD / Mega-CD, SEGA Genesis / Mega Drive, Super Nintendo (SNES), Game Boy Color (GBC)
The original game Prince of Persia, released in 1989, made a splash. Incredibly addictive gameplay, excellent (for those times) graphics, stunning acrobatic sketches in non-stop mode - all this tore out of reality thousands of gamers around the world. It was in this game that motion capture technology was used for the first time in history (that is, the prince's movements were recorded from a living person).
The game takes place in ancient Persia. There is a war going on and the Sultan is forced to go to the battlefield. During his absence, the evil vizier Jaffar seizes power in the country. He captures the daughter of the Sultan, and throws her lover (the protagonist of the game) into prison. The vizier confronts the princess with a choice: either she becomes his wife, or dies a painful death. The princess has exactly one hour to think. It is this hour that is allotted for the game. Do not make it in time - you will lose.
Actually, the game begins with how you are thrown into a dungeon, which is a huge maze consisting of twelve levels. At each level, numerous guards await you, undead skeletons that cannot be killed, as well as dangerous traps such as knives crawling out of the ground and cutting axes. At the end of the last level, you will personally meet with Jaffar and if you win, you will be reunited with your beloved princess.
This game served as the beginning for a whole series of Prince of Persia games, has been ported to a huge number of platforms - from PC Amiga to mobile phones. The modern Prince of Persia trilogy from Ubisoft is also very popular. In general, if you want to touch the classics, download it boldly - you will not regret it.
By the way, the world record for completing this game is 13 minutes 45 seconds. Are you weak?
‹
›
Home
View web version