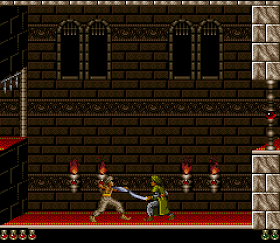 Genre: Action
Perspective: Side view
Visual: Fixed / Flip-screen
Gameplay: Platform, Puzzle elements
Setting: Middle East
Published by: Konami of America
Released: 1992
Platforms: Super Nintendo (SNES), SEGA Master System (MS), SEGA CD / Mega-CD, Nintendo (NES), SEGA Genesis / Mega Drive, DOS, Game Boy Color (GBC)
The cult game of Jordan Mechner is now also on Snes. As always the evil vizier Jaffar, in the absence of the Sultan, put an ultimatum to the princess - to marry him or die, giving her a certain period of time for reflection. If the prince does not have time to get to the princess for the period announced by the vizier and help her - this will be our loss in the game. So all sorts of deaths are not particularly addicted, as the time for your miscalculation is not restored, and every moment decides the fate of the princess. Only careful and confident passage with knowledge of all the traps and forks will help us save the love of the prince and the princess. The game has retained all its features, and can even become even better. Fascinating backgrounds, colorful graphics, oriental music, all fit into the overall atmosphere of the game. In the last moments, coming out on the balcony, the prince looks at the image of the princess, who appeared in the environment brightly shining in the night sky of the full moon. Added new branches with all sorts of enemies, very impressive six-handed monster in one of the levels with which the prince can not do anything. As always with the enemies need to straighten out the skillful fencing, which was quite plausibly realized in the original series of the game. There were all acrobatic tricks, jumps, scrambling and all the rest. In general, all acrobatics, which was also realized in such cult games as Flashback and Blackthorne, known on different systems or Nosferatu, an exclusive hit for Snes. In our descriptions, we always try to tell you about the differences in versions of games from different regions and we advise which one to choose better. If you download the Japanese version of the game, you will be able to see the episode in the initial cutscene, as the prince beats the Vizier servant with sticks. And what version of this wonderful game to play later decide for yourself, more like no differences were seen.
‹
›
Home
View web version