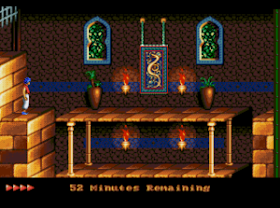 Genre: Action
Perspective: Side view
Visual: Fixed / Flip-screen
Gameplay: Platform, Puzzle elements
Setting: Middle East
Published by: Tengen Inc.
Released: 1993
Platforms: SEGA Genesis / Mega Drive, SEGA CD / Mega-CD, SEGA Master System, Nintendo (NES), Super Nintendo (SNES), DOS, Game Boy Color (GBC)
Great legend game, about the nameless hero - Prince of Persia. The action of the game unfolds in ancient Persia. The Sultan is at war in another country, this is what his vizier Jafar uses, he wants to take power into his own hands. But the daughter of the Sultan, the princess, opposes him. Jafar locks her in the tower, and tells her that if she does not make a decision within an hour, and does not marry him, he executes it. To save her can only love her prince, thrown into prison. That's where the game begins. You do not have much time to get from the dungeon to the tower, just 60 minutes. During this time, you must solve many mysteries, and destroy a dozen guards. Basically you have to solve various puzzles and puzzle how to bypass this or that trap.
Jafar has his prototype from Ja'far bin Yahya Barmaki precisely for this in many games and films the vizier traitor is Jafar, remember only Arabian Nights or Aladdin.

The main danger of the first level is the collapsing floors. Beware of falls from a height - it will be detrimental to the health of Prince of Persia. In the left part of the palace there is a sword. He is indispensable in the fight against unfriendly sentinels.
When you are on the second level, be careful - the armed villains can hide behind the columns. Do not try to quench your thirst with a blue jug.
Do not try to kill the obsessive skeleton, which you will meet at the third level ... The only way to deal with it is to push it into the abyss. Be quick - after you get to the secret panel, which opens the way to the next level, you still need to make the journey back.
At the sixth level, everything becomes much more complicated: the pits are even wider, and the guards are more skilled warriors. For the transition to the next stage, it will be necessary to jump into the abyss.
At the ninth level, you will have an unpleasant surprise in the form of a green jug - do not drink from it in any case. To go to the next stage, it is necessary to collapse the floor to the door opening button.