Out of This World (DOS) 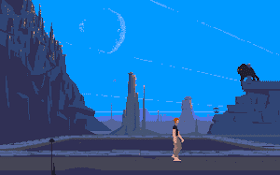 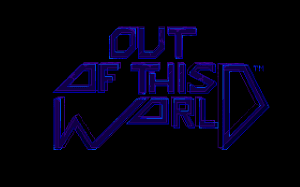 Although Eric Chahi belonged to the French studio Delphine Software, in fact, alone she worked on the game. The music for Another World created by Jean-Francois Freitas. After the release of the game received consistently positive assessment of critics who praised her for originality gameplay, cinematic storyline and audiovisual setting. Another World set a new canon of creating electronic games in the history of the game, geared to different tasks set for the player and an extensive and adventurous action. In 2006, he released reissue of the game under the name of Another World: 15th Anniversary Edition, with refreshed audiovisual binding, and in 2011 - the anniversary version under the title Another World - 20th Anniversary. Overall, in the 90s of the twentieth century Another World was sold in number about 1 million copies.

Control of Another World is fairly simple, but taking into account that, for obvious reasons, the game is not normal training, and the gameplay immediately imposes stringent requirements on the reaction in the first place deal with the keys . Arrows and responsible for the movement of the main character. The - squat, - jump.
The Ctrl key is responsible for the action or kicking. True, have to fight only in the first episode, then you will find a laser pistol with which to be parted again to end the game. One press Ctrl - a simple shot. If you hold Ctrl for a second and then release, the hero will create a force field (a sure sign that you are doing everything right - a small blue ball). If you hold Ctrl for a few seconds, you get a powerful shot (there big blue ball). They can destroy the force field of opponents, locked doors, and especially strong monsters.
If you press the and Ctrl, Leicester kick or shoot from a sitting position - it is easier to destroy enemies.
With the management sorted out, we get down to the opponents. The first monster you meet in the game - a giant octopus in the pool. It is impossible to finish, so you need to quickly rise to the surface. Later you can get acquainted with leeches. They can jump or kick to score. Just be careful: some individuals are crawling on the ceiling, then to parachute on top of Lester. Finally, the black beast with which fate will bring you immediately after contact with leeches and at the end of the game - you can not kill him, too, will have to apply the method .
Many problems will deliver live traps, which are located on the floor freely and strive to bite your legs and other body parts. They can not be destroyed, only to jump. If the number of traps a double - long jump. Next to the live traps tentacles hanging from the ceiling. Past them, you can just run, but it is better to destroy. Simple Shot will force tentacle to hide for a few seconds, and the powerful shot will destroy them forever. However, some tentacles hang too high - they do not get a gun. In this case, will have to run under them as fast as possible.
But the most common enemy - the guards, aliens, armed with laser pistols. Enemies do not lack intelligence, so often put power panels to protect against gunfire. If this happens, immediately put your energy field, then walk forward a bit to because of it sticking out a hand and a powerful shot beat the enemy force shield. Now quickly finish off the usual security guard shot.
If two or more opponents, after a powerful shot and a conventional shot just need to create a second force field. It does not matter, you have time to kill a guard or not, you still need to put the protection, otherwise you precisely sprayed on the atoms (verified by experiment). Sometimes the opponents themselves use a powerful shot, but these things are usually written script, so read more about it in passing. This includes throwing grenades the enemies that pass through the force field.