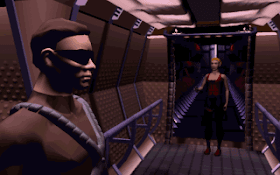 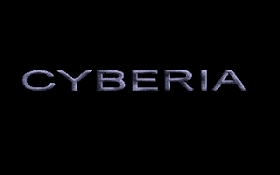 Externally, the device looks like regular sunglasses, but in reality - it is a powerful cybernetic system that combines all of the features available in modern computers. Winner of the "points" can look at the world in the infrared range and, of course, to see a wide variety of thermal radiation - in his power to monitor the electromagnetic fields - finally, Blades to address a "bioscan" space (the interior, atmosphere, seas), and contemplate all organics. In addition, the "points" - it is also a kind of telepathic Cordless, with whose help can be installed communication between several people at once. No less a pioneering discovery (at the same Blades) was the invention of self-charging battery is disconnected. As a result, the new system has begun a series of groundbreaking work in the field of military and civilian electronics.
Five years ago, in 2022, the Earth has experienced tremendous economic innovation. Long doubted states united in a great alliance with a strictly centralized planned economy poluchivshii sonorous name of Free World Alliance (Free World Alliance, or FWA), however, only the merged business structures, the people of the Alliance retained their languages ​​and traditions.
Merciless NTR (scientific and technical revolution) gave human.
Celebrate mass inventions. Life has become easy, but ... boring. And many, this is depressing. Man has become smarter, stronger and more ruthless. Children are growing up faster than in the past. Opening in microelectronics allow multiple accelerate the learning process of young and green. Sixteen-year ... man almost indistinguishable from thirty of the father.
And nothing, but have acquired a lot of the unique capabilities of the new humans lost their moral compass that retention whether their ancestors from the crime of the line beyond which begins lawlessness.
And the criminal world cheered:
weak, uncoordinated mafia clans XX century merged into planetary criminal "raspberry", control virtually all the criminals of Earth. Mafia was a true state of the state - with its government, its industry, its research institutes and laboratories.
Free World Alliance announced a decisive war crime, but it was moving with difficulty, defended the mafia as I could. Oh could it much ...
And another excursion into history. In 2009, long before the global turmoil, the son of composer Mack (Marcus Antomus Kinsston, or Mac) baby boy Zak (Zebulion Pike, or Zak). Quite respectable parents were crumbs., Active members of one of the many crime families. After Two years after the birth of Zak's police managed to track down and destroy the clan, most of its member mafia. Among the latter was the wife and older Phaser Kingston Barbara (Barbara Feather), Zak's mother died and he soon Mac. 13-year-old was left an orphan, after long wanderings through the world Zak joined a group of teenagers who lived in the urban labor schobah and provide food theft Once Zak managed to sneak around the famous Blades. "Points" so loved the kid, that he literally could not live without them. However, soon after teenage gang was in the police ...
And the young man fell into the mighty Pentagon by military leadership of the Alliance. Choice offered Zak was little, either served in the police or prison Clearly, sensible boy chose freedom and went on his first assignment.
What is the gist of it. Somewhere deep in Siberia (hence the name "game" - Cyberia) a man named Boris Kalnikov, mafia activist, devised creators? Something terrible (exploration, alas, is not reported what). Known is the name of the project - CYBERIA, and the fact that it is a round building over fifty meters in diameter. Zak must destroy this criminal complex at all costs ...
But these were the flowers (history), the berries begin with your appearance on the place of the main character. However, before we tell you about the essence of the game, I want to focus on its design.
Despite the fact that there is no interactive fashion (shot on video, and then digitized) images, Cyberia guaranteed hit you and lots of graphics quality. This writer sometimes caught myself thinking that game is not seen as any video.
Now directly on the plot. Unlike most other fly tightly bound to the "base", Cyberia is done by the script, which has turned almost the entire game in one long mission with recurring places "rest stops."
Flight tasks so often interrupted by various puzzles that you have a choice of not only the field, but stops in between. In between missions you'll have full use of Blades-by "points," which is a secret agent Zak. They essentially ease your task, as they have a number of useful features. Thus, the mode of infrared scanning, includes keys F1, captures thermal radiation (eg, radiation from the human body) - an indispensable thing for a spy!
Tracking mode electromagnetic waves, activated by pressing F2, allows you to see through objects and, therefore, to find out how to work certain mechanisms Bioscan (F3) brings around you all organic, the way, as we know, are the people (enemies especially). The only pity is that the range of this scanner is very small. It is important to say that the use of Blades quickly "drains" batteries, and if you want to re-use the wondrous "glasses", it is best to wait a full battery charge.
The flights are on the latest combat vehicle TransFighter-22 - stealth aircraft, stuffed to the very "can not" complicated cybernetics. Each mission ends with the destruction of some main goal, without which the game simply stalled.
Cyberia easily maintained. Possible resumption of play from anywhere (as long as you are there already visited), even after restarting the program.
Successful you are flying!