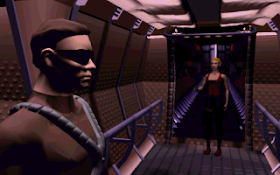 Genre: Action
Perspective: 1st-person, 3rd-person
Art: Video backdrop
Gameplay: Puzzle elements, Rail Shooter
Setting: Cyberpunk / Dark Sci-Fi, Sci-Fi / Futuristic
Published by: Interplay Productions
Developed by: Xatrix Entertainment
Released: 1996
Platforms: 3DO Interactive Multiplayer, DOS
Cyberia takes us to the near future - 2027 year. Five years ago, there was a global economic collapse. Now the world is controlled by two forces - the First World Association in the West and the Cartel in the East. Prior to the leader of the PMA, Devlin comes information that a secret base in Siberia is developing weapons of enormous destructive power. Thinking how to uncover the curtain of mystery, Devlin addresses to the services of the criminal, cyberpunk Zebulon Pike (Zak) and hires him to penetrate the Complex. Unfortunately, the Cartel is also interested in this weapon and will not stop at anything. to seize it. Zak's mission is greatly complicated, as the Complex is already awash with Cartel agents, and in dangerous proximity to new weapons, scientists played in God, creating very unpleasant creatures.
Thanks to its unique story, excellent graphics, animations, mini-games, Cyberia has received the highest reviews all over the world. The game was developed under DOS and later ported to 3DO, PlayStation and SEGA Saturn. The second part, Cyberia 2: Resurrection was released for DOS and Windows 9x.

If here now give at least a partial description of the passage of the whole game, then it will take about twenty pages, or even thirty, which, unfortunately, is impossible. Although I must say that the game is worth it, but you can not embrace the immensity. It's a pity! Therefore, we confine ourselves to general recommendations. The game is divided into several conventional parts.In the beginning the hero, by your diligence, wanders around the station and finds himself in various situations, from which he must emerge victorious. And on the development of the plot you are directly involved. Of course, it's good to know conversational English, but you can do without it, relying on intuition and on a scientific approach called "tyke method." Very pleased that to continue the game, in the event of a lethal outcome, you can re-practical from any passed site.Then there is a lot to fly and shoot on the newest combat vehicle TransFighter 22 - an airplane invisible. Here you must perform seven complex tasks, such as the destruction of enemy ships, submarines, cutters penetrating a protected cargo tunnel and flying through it, fighting with enemy aircraft and helicopters.At the time when you are at the station, you must actively use the sticks. Just remember that they need constant recharging and therefore do not scan often.Constantly have to solve puzzles and tasks:how to clear a bomb and disarm a grenade;how to open those or other doors;which passwords for computers and terminals;How to pass protected corridors and rooms;and in the end how to deal with the virus.In general, the whole game is interesting and very instructive. The movements of the heroes are almost ideal and almost indistinguishable from natural, the graphics are beyond praise. A lot of funny things, such as, the fall of the hero in a puddle with oil, a burn of the hand and so on. In conclusion, we will give some advice:

The game begins in the Gulf. Press Up to move forward. Behind the door to the left is a lift to the hangar. Leaving the boat, go to the door to the right (⇨, ↑, ↑, ↑, then ↑). Gia will ask you to defuse the weapon. Submit (⇦). After turning on the air alarm, run for Guia (Up, Up) and turn to the right as soon as possible.
Available weapons are shown in red strips, shields are green. Five blue indicators in the middle correspond to the damage. Points on the radar show what helicopters, fighters, mine fields, etc. should be destroyed.
When you have finished the battle, you will receive a kiss from Gia (Up). If you abandoned the kiss (Down), press Up, Up, Up, Up, Up, to go back to the hall. Press=>, Up to return to doc. To get to the lift -=>,=>, Up,=>, Up. When operating the elevator, press=>,=>, Up, and use the button in the corner of the room. Enter the elevator (=>, Up, Up) and head to the hangar (Up, Up, Up, Up, Up). Check the plane by pressing <=, Up. Next, you need to press <=, Up again.
If you accepted the kiss of Gia, Santos will order Zack to be arrested. Approach the dead man, take the clip (Up, Up, Up, Up) and go up to the second floor (Up, Up). Click Up, Up to enter the hangar. There immediately turn around and lock the door (<=, <=,, Up, Up, Up, <=, Up) and enter the code "Einstein".
Remember one more code that is in the computer. Exit the administrative center and walk along the corridor, kill the guard in the elevator, quickly go to the elevator control panel and dial the three-character code from the administrative center. As a result, the corpse of the guard along with a powerful explosive will go to another floor. You must quickly follow the repository. Move aside the box: behind it will be the door, which leads to the hidden lift. Go down to the lower floor. Having opened the door, in the compressor room approach as close as possible to the opposite wall and wait until the guard turns away to slip past his glass cabin. Going out into the corridor, turn right, enter the computer room and open the blinds indoors using a computer. Leaving this room and leaving the corridor, go to the next after the compressor door. Disputed with the guard. Approach the elevator. To the right of the door there is a lattice. Push it and go through the long tunnel to the end. Here you will get a red card, with which you can open all the doors.
You will go to the anti-virus lab. After turning on the computer, remember the number of the cleaned system. Then follow the corridor where you killed the guards. Open the door, go through the infected premises and enter the dark room; where you need to enter the number of the cleaned system in the computer. Then irradiate the decontamination beams in the corner structure.
Go to the laboratory of Charlie. He will help you destroy the reptiles. Having destroyed all, you will fall into the corridor, at the end of which there is a door with a pomp lock. The lock will open if all the pistons are at the level of the steam channel. After the door opens, you will enter a room with a meteorite hovering under the ceiling. At the end of the conversation, go to the meteorite and merge with it. You will have the last mission in space - the destruction of the spaceship carrier. The blast wave after its destruction will throw you back to your native land.
‹
›
Home
View web version