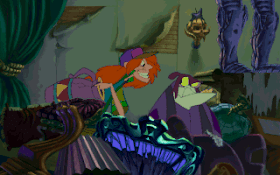 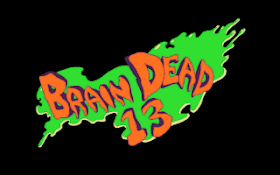 The game is more than ample opportunity to explore the world than previous interactive games, because it has corners. Therefore, the player can find the way to the "brain chamber."
Just as in the Dragon's Lair, the player must react quickly to events. Otherwise it will kill Fritz or anything in the room where it is located. However, the player has an infinite number of retries: after the death of movie clip shows the resurrection, where Lance comes out of the coffin, engorged with blood, and so death scenes are pretty brutal, but done in a cartoon style and are not overly bloody.

The game received mixed reviews from critics. Some critics felt bad game design, game play based on the method of trial and error, illogical puzzles, the quality of sound and motion inadequate. Columnist for the magazine Electronic Gaming Monthly, on the contrary, said the bright and clear graphics, as well as the humor. The site WorldVillage game a masterpiece of its genre.
Beautiful painted quest, almost interactive cartoon.
You play the role of a programmer who called standing alone in a strange kind of lock to fix your computer. Once our hero stepped into the place, he realized the true intentions of its inhabitants, is not caught by people ...
The plot is good. External sales - over: this is animation, hand-drawn graphics and such can never become obsolete. But here's the gameplay, well, the "original." Our problem here - just get out of the castle. Keep us in the first place, numerous traps, and secondly - the persecution of the monster with hooks instead of hands by the name of Fritz (who is a servant of the main villain, Dr. Nero Neurosis'a). From here, in general, you only need one - choose the direction of "travel" through the castle, and each decision can lead either to continue or to death.
Verdict - Braindead 13 is interesting as a cartoon, but still not like a game. It is very beautifully done, but still to play the same level of interactivity would like something more.