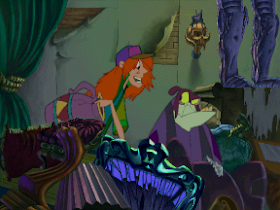 Switch "NVRAM Storage" to Shared and restart emulator. Before swap CD, save state to file, next CD, upload save state file, restart emulator.
Genre: Action
Art: Full Motion Video (FMV)
Gameplay: Quick Time Events (QTEs)
Published by: ReadySoft Incorporated
Developed by: ReadySoft Incorporated
Released: 1996
Platforms: 3DO Interactive Multiplayer, DOS
The game provides more opportunities for exploring the world than previous interactive games, as there are intersections in it. In view of this, the player can himself look for a way to the brain chamber.
As in Dragon’s Lair, the player must respond quickly to events. Otherwise, he will be killed by Fritz or anything in the room where he is located. However, the player has an infinite number of retries: after the movie with death, a movie with a resurrection is shown, where Lance jumps out of the coffin, gets poured with blood, etc. Death scenes are pretty cruel, but they are made in a cartoon style and are not excessively bloody.

Young computer geek Lance is called upon to repair a computer in a dreadful old castle. Having repaired a large supercomputer, Lance learns about the devil's plan to take over the world. Soon Lance begins to pursue Fritz, the psychotic servant of Dr. Nero Neurosis, the main villain of history (this is the brain outside the body).
The player must lead Lance through the castle, defeat Dr. Neurosis and escape.