Out of This World (SEGA) 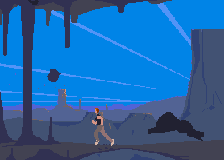 Genre: Action
Perspective: Side view
Visual: Fixed / Flip-screen
Gameplay: Platform, Puzzle elements, Shooter
Setting: Sci-Fi / Futuristic
Published by: Virgin Games
Developed by: Delphine Software International
Released: 1992
Platforms: SEGA Genesis / Mega Drive, 3DO Interactive Multiplayer, Super Nintendo (SNES), DOS
A cult game from Delphine Software. A certain scientist decided to conduct a physical experiment deep in the night. It seems that nothing foreshadowed any special events, and our hero only quietly consumed coffee from his freshly received jar from the machine. However, suddenly struck by lightning and the resulting reaction takes him to the Another World. All that we have is an instinct for survival, an instant reaction to everything that happens and fast feet. All that is in this world are wildlands with dangerous ravenous creatures, all time striving to eat anything, and hostile humanoids with their technical traps. However, by imprisoning the hero in prison, only the case helps him to escape by taking up arms, he has nothing left to do but just survive in this world and try to escape with his newfound friend, with whom they were sitting in one cage. The adventure is very dynamic and exciting, along the way you will have to solve a number of not difficult logical situations, constantly interact with your extraterrestrial friend, constantly rescuing each other from various dangers. Recommended for all lovers of classics, although it is known on many systems, the version for Snes is also worthy of walkthrough.
You are Leicester Knight Chaykin, a physicist who prefers to work alone. But at one point everything changed. The thunderbolt triggered the hardware that opened the portal to another world. You are thrown right there and now only your mind will allow you to survive in this terrible place.
It's a fantastic, excellently made and fucking hard game.In Europe, this game was released as Another World.