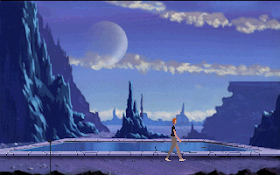 Genre: Action
Perspective: Side view
Visual: Fixed / Flip-screen
Gameplay: Platform, Puzzle elements, Shooter
Setting: Sci-Fi / Futuristic
Published by: Interplay Productions
Developed by: Delphine Software International
Released: 1994
Platforms: 3DO Interactive Multiplayer, SEGA Genesis / Mega Drive, Super Nintendo (SNES), DOS
It's like in the film "Back to the Future", as to what meteorologists weather can never accurately predict. Here, literally the other day passed, that without rain, and the shower, however, was a success. It was with a shower and the story began in the game Out of This World. Professor Lester Knight Chaykin, in the evening in inclement weather arrives in a secret (and apparently apparently public) laboratory, on his own Ferrari, which kindly confirms the artificial intelligence of the laboratory computer (apparently thinking to knock on the tax inspection). He comes there for a reason, and in order to conduct a seemingly ordinary experiment to accelerate the particles and everything would have passed normally (this is not DOOM), if just during the experiment in the laboratory did not shandaran, quite classical, sometimes stuffed with nausea, lightning . There was an explosion and after that, it all started.
What would immediately confuse no one, do not spin unnecessary intrigues and not bring confusion, I report that Out of This World and Another World - this is the same game that came out under these two names on different platforms and in different countries. We will assume that we have dealt with this. And now back to the plot. Immediately after the explosion, Lester finds himself, at a quite decent depth of the reservoir, clinging to what is left of the computer control panel. And then it is worth recalling that the game has just started and if you do not hurry, then firstly drown, and secondly, even before you kill a giant slug, at the bottom of the reservoir inhabiting. Suppose you got out. As it is easy to guess, the explosion took you to another, very surreal world, or if you want a different dimension. See what beautiful clouds there are, what wonderful wild animals smile to you in the distance, clean air... Well, the slug took you out on the beach.
The French company Delphine Software in the early nineties did wonderful games. It is from under the pen (though rather IDE) of its developers came an excellent Flashback: The Quest for Identity, but only then, and before Flashback, the company just released Out of This World (strange that the game was developed by only one person and called him Eric Chahi). Do I know what I'm getting at? I want to say that this game is also wonderful as Flashback (or it will be more correct to say that Flashback is also wonderful as this game, although it has nothing to do with it) and deserves all sorts of praise. The only thing is that if it was easy to play in Flashback, even at the highest level of complexity, then honestly for the first time to pass Out of This World, you probably will not succeed even with 50 attempts. At least I did not succeed. Already at the very beginning, there is a chance to be trampled by a big and evil creature, to be poisoned by some kind of venomous leech, and you can drown, you can eat jaws, you can break, you can hit the floor with poisonous sewage, and simply you can fry from the blaster to a burnt toast.
Watching all this comes from the side, because, like Flashback, the game is pure 2-D. At least I was hoping for 3D videos earlier, but as it turned out they were just vector (directly Macromedia Flash some kind). But funny. From the thoughtful expression alone of the protagonist's face, you can, if not go to Nirvana, then properly chop, and even cut yourself userpics. The rest of the characters' schedule on the same level as the vector. I did not compare myself, but it seemed to me that the backdrops in the version for 3DO Interactive Multiplayer are much more colorful and better detailed than those that were versions for MS-DOS. However, do not even be here, these backdrops at all, the interest in the game would not be diminished. Such a wonderful thing, can afford to have absolutely any graphics.