Out of This World (SNES) 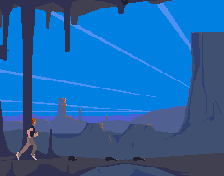 Genre: Action
Perspective: Side view
Visual: Fixed / Flip-screen
Gameplay: Platform, Puzzle elements, Shooter
Setting: Sci-Fi / Futuristic
Published by: Interplay Productions
Developed by: Delphine Software International
Released: 1992
Platforms: Super Nintendo (SNES), 3DO Interactive Multiplayer, SEGA Genesis / Mega Drive, DOS
I do not know about you, but I always wanted to know where developers get inspiration from their hit children. Who smokes crack, who dreamed about the code, and someone just saw a good movie. The guys from Delphine Software seem to be big fans of the "Planet of the Apes". Yes not the one that Tim Burton, in which the monkeys in costumes from Versace, and the one that is the most-the oldest, the same with the inimitable atmosphere. So that's it. The idea of capturing the world by monkeys interested them, and they decided. Why not make sure that players would not suspect anything, change the macaques and burned into more original creatures, change the idea of how the hero got to this very planet and do not touch anything else. Leave only the main thing.
Why did I say in the beginning that "the most cruel"? Yes, because both in the film and in the game glavgeroy - this is not a superman, scattering enemies to the right and left, but a nonentity, a slave, a lonely mosquito, which can be clapped at any moment, but which can also suck a lot of blood. The game is really very cruel, both to playing this game, and to the hero that is on the screen. No concessions. Against you is a whole planet. You only have two assistants, your partner, who will help you throughout the game, and perhaps the most important comrade is your mind and savvy.
In this game you will never leave a sense of doom, eternal wanderings through endless corridors ... Danger hides everywhere. You always have a choice how to perish: drown, stumble upon a guard, die from hunger, go insane ... The choice is yours. If there is no desire to go to another world, you will have to sweat to drag the life of Lester Chaykin (this is the name of the glavpers) from the beginning of the adventure to the very last video.

Strange as it may seem, but I would like to first talk about the graphic design of the game. In general, not bad. Not more. A little bit strict, but that's exactly how it should be. Feels zakos under the blue-gray tones. Backs are drawn pretty carefully and do not cause any complaints. And generally not grateful in this game to reflect on the pros and cons of graphics. For the gameplay, the pictures, we just do not notice. Especially I got hooked on such thing as inter-mission videos. It would seem that what 3D can be in the 91st year, and even on the console. But respected developed here and tried to glory. All the moving characters and objects in the rollers are performed in an honest Tri-de. Well, almost Three-De. Yes, and drawn not tyap-blunder, but very convincing and beautiful. Something like the Cell Shading technology.

If you are currently playing the Segov version, then I'm sorry for you. The music on SN is truly BEAUTIFUL. No, I can not describe it. All. About music, not a word more. You just need to hear it, you just need to feel it. Sounds a little pumped up. Under some effects, they are frankly chosen incorrectly. But all sorts of noise, rustles only nicely complement the overall impression of the atmosphere. So for the music respect.
About the main
As always, the sweetest thing for dessert. And for us today, dessert is the gameplay. At first glance, the entire gameplay looks suspiciously like PrincePersia. Aha. We run, run, jump, run, we think, we jump again. ... That's the whole good piece of the same gameplay. To be honest, if not for puzzles, of which there are not many (but all different), then we would get another clone of Prince of Persia. Only the saber is replaced with a blaster, and the skeletons in turbans are ... some kind of monkey. It would seem, if so, then Contra is also a clone of Prince Petersia. But no. I bet that by playing in AnotherWorld, you will remember the Prince. And I assure you, you will not be disappointed. Probably the main reason why the AW did not acquire a very big popularity, is because of its overestimated complexity. Few people, having bought this game, could pass more than the first five or six locations. Only the chosen ones were destined to find out how this amazing story ended, whether Lester got home ...
The whole game helps us our friend, who was in the cage with us. We help him - he helps us. The game is really complicated. PRECISE is very important in the passage. A small oversight - start the level first. It's very tiring, so you need to consider every mistake you make and do not do it again. In general, the whole gameplay can be compared only with the daytime viewing of the old adventure film. And this is good.
How could I forget the riddles. Yes, they are really few. But they are different and it pleases. Somewhere 67% of the game we run, shoot, and 33% we break our heads and fingers over the next obstacle. Why fingers? Yes, because most of the problems here are solved only by mastery of the joystick. Who does not have a gamepad, let it suffer with the keyboard.