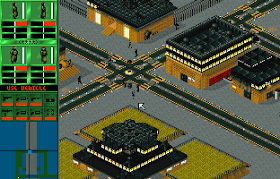 Genre: Action, Strategy / Tactics
Perspective: Bird's-eye view
Visual: Isometric
Pacing: Real-Time
Setting: Cyberpunk / Dark Sci-Fi
Published by: Ocean Software Ltd.
Developed by: Bullfrog Productions
Released: 1995
Platforms: Atari jaguar, 3DO Interactive Multiplayer, Super Nintendo (SNES), SEGA Genesis / Mega Drive, DOS
The actions of the game Syndicate unfold in the future in 2096, where all are run by criminal syndicates. The environment is made in cyberpunk style. We are observing all this in an isometric form. We have to take over the command of one of the syndicates. And move towards world domination. Now in the future each of the people in the head has a chip that changes the reality. Fight for the territory we have with the help of cyborgs. At first we will have only a pistol. But over time, weapons can be improved and we will have at our disposal a small arsenal with deadly weapons uzi, flamethrowers, sniper rifles, time bombs, lasers, a huge destructive rocket launcher and even brainwashing devices. Missions will be the most diverse to destroy all of the warring syndicate, kill the boss, robberies, robberies, etc. In the game there is also a strategic part of the game in which we have to manage the captured territories, assign taxes to them and make sure that the population does not rebel. The game is slightly reminiscent of GTA, we can also get into cars, shoot, who we want, go into buildings, etc. But you also need to follow around and not yawn, because with the same ease you can get a bullet in the back or be crushed by a car. A unique feature of the game version for Atari Jaguar is the ability to zoom in and out, which is very convenient during certain actions.
‹
›
Home
View web version