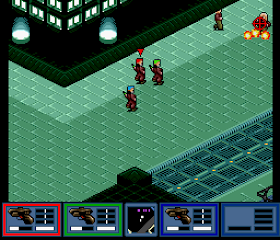 Genre: Action, Strategy / Tactics
Perspective: Bird's-eye view
Visual: Isometric
Pacing: Real-Time
Setting: Cyberpunk / Dark Sci-Fi
Published by: Electronic Arts
Developed by: Bullfrog Productions
Released: 1995
Platforms: Super Nintendo (SNES), 3DO Interactive Multiplayer, Atari Jaguar, SEGA Genesis / Mega Drive, DOS
With trainer. Future. The world is divided into zones under the control of syndicates, whose power is supported by the "chips" of virtual reality, implanted in the brains of citizens and substituting illusions for the world around them. Conflicts between syndicates in the redivision of zones of influence are decided by the use of squads of combat cyborgs.The player will lead one of the syndicates and with the help of cybernetic forces to seize control of the world.The game consists of two parts: strategic and tactical.

The strategic part consists of economic and scientific-technical elements. Regulation of the level of taxes in the captured regions is available. The ratio of the population of the region to power depends on the level of taxes. It is also possible to conduct research in the field of armament, equipment and cybernetic bodies for agents in the combat detachment.

To perform combat missions it is required to recruit a detachment of one to four agents. Most often, the mission of the mission is to destroy all enemy agents or a certain character, but sometimes a certain thing is required to complete the task, sometimes unavailable without research. The highlight of the game is the ability to crack the "chip" of illusions in almost any character directly during the mission. Interception of enemy agents and arming passers-by allows you to turn the weak four of the cyborg player into an intimidating punitive detachment of several dozen guns.